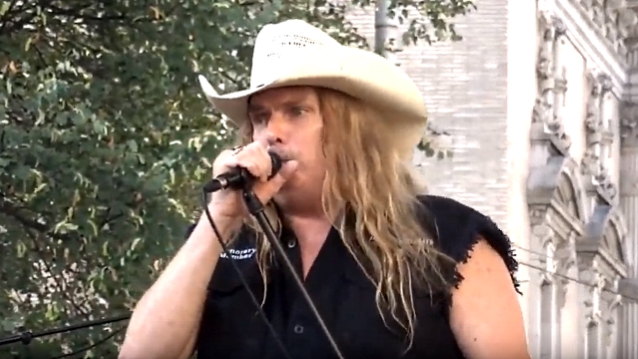 Phil McCormack, the frontman for rock band MOLLY HATCHET, has died. No official cause of death has yet been revealed, but the 102.7 WSNR radio station has reported that it "looks like a heart attack." He was 58 years old.

MOLLY HATCHET issued a statement on McCormack's passing earlier today, saying: "It is with great sorrow to announce the passing of our friend and band member, Phil McCormack. Our condolences and prayers go out to his family during this time of loss. Phil's contributions to MOLLY HATCHET were heard around the world. He will be missed but never forgotten."

McCormack officially joined the band in 1996 but stood in for the late and former MOLLY HATCHET frontman Danny Joe Brown many years prior.

Formed in 1975 in Jacksonville, Florida, MOLLY HATCHET has released a dozen studio albums — 2010's "Justice" being the latest — plus several other live and greatest-hits compilations.

Known for hits "Flirtin' With Disaster", "Whiskey Man" and "Gator Country", the band has undergone numerous changes in its nearly four-and-a-half-decade history, including a brief split in the early 1990s. In recent years, fans have mourned the loss of several former bandmembers, including frontman Danny Joe Brown, who died in 2005; original guitarist Duane Roland in 2006; original drummer Bruce Crump in 2015; bassist Banner Thomas in April 2017, original guitarist Dave Hlubek in 2017; and frontman Jimmy Farrar in October 2018.

MOLLY HATCHET released its debut album on Epic Records in 1978, shooting to the top of the charts. "Flirtin' With Disaster" followed, and the title track became a legendary hit for the band.

It is with great sorrow to announce the passing of our friend and band member, Phil McCormack. Our condolences and...