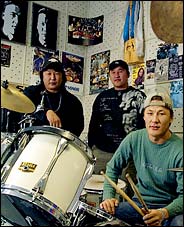 Taipei Times is reporting that a Mongolian heavy metal group called HURD (photo) had their scheduled three-day tour of China cancelled after the local police got nervous and sent riot policemen and trucks to surround the college campus where the group was to play. They checked identity cards, detained four people overnight and dispersed about 2,000 frustrated concertgoers into the autumn night.

Described as "long-haired Mongolian men in black, whose office decor features a wolf pelt, a portrait of Genghis Khan and a music store poster of Eminem," HURD's tour was to culminate Nov. 1 with a performance in Hohhot, capital of the Inner Mongolia Autonomous Region. Read more.