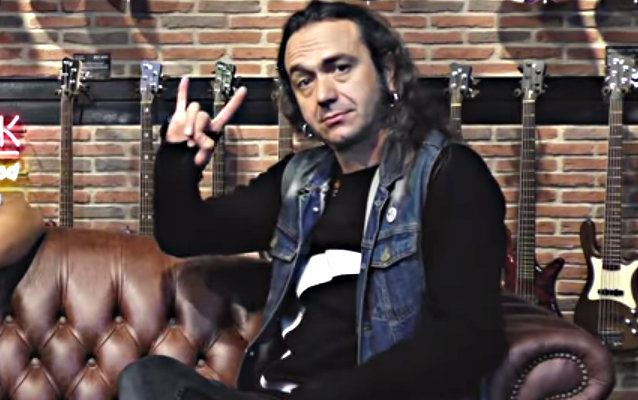 Spark TV, which is part of the Czech monthly magazine Spark, recently conducted an interview with frontman Fernando Ribeiro of Portuguese metal veterans MOONSPELL. You can watch the entire chat below. A few excerpts follow (transcribed by BLABBERMOUTH.NET).

On MOONSPELL's forthcoming Portuguese-sung "1755" full-length, which was originally intended as an EP:

Fernando: "When we first talked with you, we were entertaining the idea of making this into an EP. We recorded, just recently, a DVD in a venue in Lisbon, our hometown and capital, that is going to be released next year. We got gripped by the music and by the concept. We said, 'Let's put all the strategy, all the releases, etcetera, because we are a band, and what counts for us, definitely what keeps us together, is our creativity. This is a great concept.' So we decided to make a full LP, '1755'. We couldn't stop at those four songs, so we created six more songs. It's quite a step into other directions. It's totally sung in Portuguese."

Fernando: "I don't know. Opera is a different thing than metal. Sometimes there's rock operas, metal operas, especially in the '70s, there was a lot. So it's not really constructed like that. It's more constructed as a kind of a tragedy, like with a choir, like a Greek tragedy, more of a theater play with music. We're also trying to put this into the live show when we start touring for this album. It has to be more [theatrical]. It's in Portuguese, so there has to be extra [visuals] so people know what I'm singing about. It has many, many references to metal, but also to other kinds of music. In Lisbon and still in Portugal, the end of the eighteenth century, we were one of the metropolises for the whole of Europe and all over the world. Big ports. White people living there, black people, people from the Far East. It was a community that was together besides the Inquisition, was very strong in Portugal, but they lived in a kind of harmony. There was many influences from other cultures that we took as well as a part of our Portuguese culture. That's why the album is much more dramatic, it's also heavier, because it's [about] an earthquake. We couldn't do ballads. [Laughs] Also, there is the percussion part, this orchestra parts, lots of work with the vocals, with the choirs. We wanted people to get transported also into their fears. I think regardless of if we call it a metal opera or metal theater or a historical album, I think, what we've tried to do is paint the picture to the listener."

On why the band decided to sing the album entirely in Portuguese:

Fernando: "I don't think the album could be otherwise. We never tried it in English. It's just for the fun of it. We could make it sound [okay], but I think it was very important, the subject I'm talking about and the names I wanted to invoke like Lisbon, Portugal, I wanted to say 'Lisbon, Portugal.' I wanted to say it in my own language. It makes perfect sense. Some people say it's a dare, but when you see bands like [Icelandic atmospheric metal outfit] SÓLSTAFIR, we don't understand anything what they say, or bands who sing in Norwegian, many bands did that, I think sometimes the language can be a barrier and sometimes you pay too much attention. I think when you don't know the language, you pay more attention to the music and to the atmosphere. I think the Portuguese and the vocals are another element to this new MOONSPELL adventure. It couldn't be otherwise. It had to be in Portuguese. And when I told the band and when I told the label, nobody was too scared about it."

On why the Lisbon earthquake of 1755 fascinates him so much:

Fernando: "It's a big part of our history. First that I heard of it, I was in a classroom. Everybody knows it, of course. Lisbon is still an area that is very exposed because there's a big raft, just like a breaking point just outside of Lisbon, into the sea. Our institute is always checking it for possible earthquakes. A couple of weeks ago when we were releasing the news for '1755', there was a minor earthquake in Lisbon, like 4.3 [on the Richter scale]. While in 1755, there wasn't the Seismology, it was one of the many things that earthquakes brought, not only death and destruction, but progress as well. That's this contrast that interests me."

"1755" will be released on November 3 via Napalm Records.

The 1755 Lisbon earthquake occurred in the Kingdom of Portugal. In combination with subsequent fires and a tsunami, the earthquake almost totally destroyed Lisbon and adjoining areas.