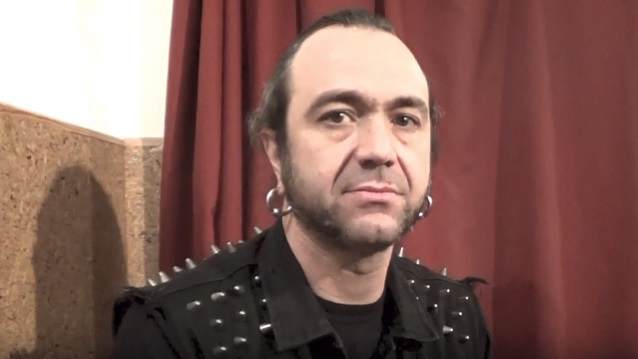 Impact metal channel conducted an interview with frontman Fernando Ribeiro of Portuguese metallers MOONSPELL prior to their January 21 concert at A38 in Budapest, Hungary. You can watch the entire chat below. A few excerpts follow (transcribed by BLABBERMOUTH.NET).

Fernando: "Spectacular, I have to say. It's a different record. It's a concept record. It's a record sung in Portuguese about the history of Portugal, but also the European universal effect the [1755 Lisbon] earthquake had in terms of society and religion, especially. Even know we knew it was an album that would hit very hard in Portugal and in Brazil and probably in some Latin American countries and it's happening, but I think some of the most surprising, best reactions have come from countries that have no idea what I'm talking about. I think that's quite an achievement because we did flirt with Portuguese in 'Alma Mater' and 'Opium', and people always loved that, but now we try to put '1755' as an experience, as a sonic experience with Portuguese lyrics. It seems like the reviewers and especially the fans, loved it. Sometimes, there was no expectation, so they listened to it with a totally clear mind. It's like MOONSPELL, but it's brand new at the same time. I'm very happy and actually very surprised that non-English people even try to sing along during the concerts and they know the album very well."

On whether it feels different "spiritually" when he sings in his native tongue of Portuguese:

Fernando: "I think it does. You think it wouldn't, but I think it does. I always wrote stuff in English for MOONSPELL and the forthcoming album after '1755' will be for sure in English, but I never dug so deep into Portuguese before writing for a band, writing for MOONSPELL. So, I think yeah, you're right, in terms of commitment and feeling, it's like English, there's always a little barrier because we have to think about it before we speak. We're finding the words in our head because I speak Portuguese with my kid, with my wife, with everyone and most of the stuff I write was in Portuguese. Yeah, Portuguese is something that runs very naturally and allows me also to have a more dramatic side as I have on the album."

On whether he thinks certain languages have more energy than others:

Fernando: "I love all languages. I think languages are one of the truest identities. We are very happy we have our own language and that we don't speak Spanish on the contrary of what most of the world thinks. They're always saying 'gracias' to me. We have our own language, of course, it has some similarities with Spanish, but at the end of the day, it's totally different. We can definitely speak Spanish, but the Spanish never bother to speak Portuguese. So, I think some lyrics are special. I think my favorite, or some languages that are special for lyrics, I really love SÓLSTAFIR and SHINING albums because they are in Icelandic and Swedish. I think other, probably more central Europe or even south Europe languages, can be really beautiful, like Italian, it's a beautiful language. To sing in Italian, I mean, opera, it was almost a rule to sing in Italian before it got translated into other languages. Of course, we know that German sounds good and powerful because there's many German bands, RAMMSTEIN on top, but all the other bands who sing in German. I think French, yeah, some languages that I try to read and try to have a different kind of magic. English, is like anything in the 21st century. It's a commodity. It's helpful for us to speak with the fans everywhere in the world, but we should not forget it's not our language. Sometimes we just butcher it and people don't understand what we're talking about."

Fernando: "We learned a lot from every country. We learned discipline, we learned chaos, we learned how to be resilient and especially how to use our Portuguese pessimism in our favor, making a band, expressing ourselves and dealing with it. Many bands, why there is not many bands from Portugal? There's talent there, but people go through the grinding wheels like we did. We were a bit braver on that aspect, so, on the other hand, what can people learn from the Portuguese? I don't know…we have proven ourselves like many small countries that together and with the national goal, we can demand much stuff. There's a lot of proximity, family values in Portugal, there's warmth. I think that can be learned for some countries. Some countries that we go to, in our opinion, are too cold for their kids. Portugal is a country that doesn't have any kind of problem in showing that it's romantic and melancholic. People love each other, but there's also a lot of assholes and killers in Portugal. Also, I think something people could learn from Portugal, more technically, we have a lot of scientists, but Portugal is not in the eye of the world, now it is more. Sometimes, people, for instance, like red wine, you go to a shop and you got red wine from all around the world. Portuguese red wine wins a lot of prizes and is considered a factory quality price, one of the best, like the Chilean, but you can't find it. People could learn more about Portugal, not only about Lisbon and Porto, not only about the tourist scene because they don't appear to be something, it's not tourism to go and drink a beer in a terrace, you can do that in your country. Yeah, I think we can probably not teach anything, but we have values and legends and history and I think our album is a good example and worth giving a shot."