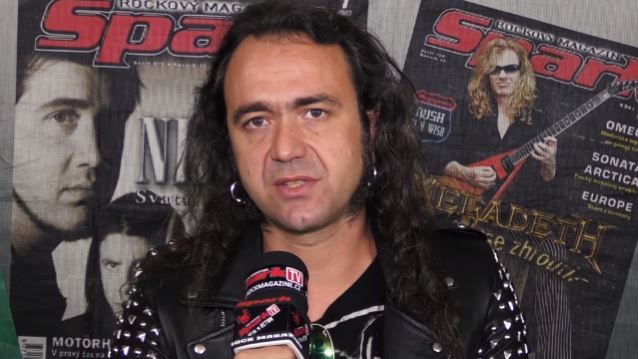 Spark TV, which is part of the Czech monthly magazine Spark, recently conducted an interview with vocalist Fernando Ribeiro of Portuguese metallers MOONSPELL. You can now watch the chat below. A couple of excerpts follow (transcribed by BLABBERMOUTH.NET).

On MOONSPELL's plans for the follow-up to 2015's "Extinct" album:

Fernando: "We're always working. We like to keep ourselves busy. And we like to tap into when we are creative. And 'Extinct' was something we did and definitely took it on the road. But after a couple of months, I had another idea, of something completely different, and we're probably going to make it into just an EP, just an experience and a concept. We're probably going to do a five-song EP that we're going to record, actually, after we play at Brutal Assault and Metal On the Hill and then Vagos Metal Fest in Portugal. And then on Monday, we go to the studio. I mean, we could go to the beach, but it's not really what we do or our style, so we're going to start recording. The drums are already ready."

On what MOONSPELL is planning to do differently on the upcoming EP:

Fernando: "The particular thing about this that will be different, it's gonna be a concept EP, and it's going to be sung entirely in Portuguese, which is something we wanted to do. I know people abroad will react to it, but I always also look up to examples like, for instance, SÓLSTAFIR; they sing in Icelandic. So it's not a problem for the fans. There are many other bands that sing using their native language. It's not that we're gonna do this in the future, but it's something that, artistically, we think it has its value. And you never know. I think it will be another thing after 'Extinct' to surprise people, because it doesn't have much to do with 'Extinct'. It's an album we are doing about a particular thing, so it's gonna sound more like that particular thing."

On the lyrical concept of the upcoming EP:

Fernando: "Well, it's simple. It's just going to about the great disaster that happened in Lisbon in the 18th Century, the great Lisbon earthquake. I always was very fascinated about the apocalypse, the end of things, and we had this experience in the 18th Century, in 1755, and it really affected not only by the destruction and the death toll — it was very high, and it was probably one of the biggest earthquakes ever to occur on European soil — but it also influenced the way people looked at Gods, at religion, the way Europe changed. And it was tragic and traumatic, but the earthquake was the birth of a more modern Portugal, a Portugal that actually would enjoy a period of prosperity after, and the Portugal that was, before the earthquake, just going down and lost in vice and corruption and greed. So I think it makes for an interesting subject, and it makes it even more interesting if I do it in Portuguese, because it happened there."

On the musical direction of the material that will appear on the new MOONSPELL EP:

Fernando: "It's not that gothic, I have to say. I think it's a more metal album. As the subject is an earthquake, it's definitely a little bit more brutal. But it still has the touch of MOONSPELL and it also has a more symphonic touch here and there. I'm not even really singing with my melodic vocals, just screaming."

On whether MOONSPELL will once again incorporate some of the oriental music elements — like they did on "Extinct" — on the upcoming EP:

Fernando: "I think it's a big influence in our music. And also, the idea behind this EP is to capture a certain feeling and a certain spirit of that time — people in the streets of Lisbon and people living their lives. And Lisbon, at the time, was a big metropolis, and it was populated by a lot of people — from Muslim people to people from Africa, new people from Brazil, Portuguese people, English people, French people… a lot of people, because Lisbon was the epicenter of many of the maritime dealing and commerce. So we are using these oriental things, because that was the stuff that people listened to in the streets as well, and that's important. We will not work with the same people as on 'Extinct', 'cause 'Extinct' is a full-on album, so we had more money to invest, etc. It's an EP, so it's lower budget, more modest production. But sometimes you just use your imagination. So I think that part, it's totally covered and it's going to be a bit different from 'Extinct', but it will have these feelings, definitely, on these new songs, because it's the feeling of the Portugal at the time as well."