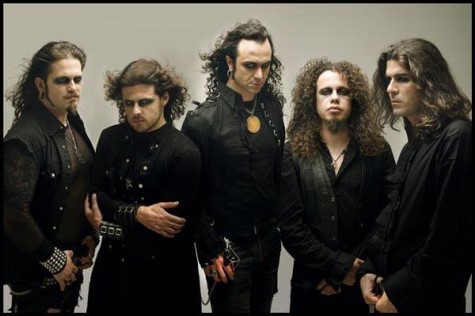 Portuguese gothic metallers MOONSPELL have set "Alpha Noir" as the title of their new album, due on April 27 via the band's new label home, Napalm Records.

Commented MOONSPELL frontman Fernando Ribeiro: "A true band has to have to a glorious past, a solid present and a bright future. More than that, a true band has to know how to live throughout all these seasons, dealing with their ghosts, their shadows, their aim at the light, moulding darkness with personality, with the impulse to be better, to do better while getting close to theirselves. Their true heart, soul and flesh.

"Never a MOONSPELL album came so close to be absolute like the new opus magna (masterpiece) 'Alpha Noir', scheduled to be proudly released by Napalm Records on April 27th, when spring racks through the wastes of winter, bursting new colours over familiar sights, once silent and white, now fiery under the blackest of suns.

"The concept of this new record, painstakingly composed by the Portuguese gothic metal knights over the past three years, after the public and critically acclaimed 'Night Eternal', is bulletproof. The band managed to split their heart and soul in half and the result is that they came even closer to themselves, the ambitious band they always were, with a undying wish not to claim any throne but to build their own ships that would take them and their fans to 'give new worlds to the world,' like in the age of discovery where the Portuguese were a leading force in the world.

"With their country drowned in a corrosive crisis, MOONSPELL filled their lungs with pride and created an incendiary album, with nine outbursts of their rockiest and thrashier riffs made superiorly dimensioned by the reindivictative lyrical content and songs structure that take you by storm from the first listen on. MOONSPELL has tapped a notch into their energy filled gothic metal by adding a guitar wall forjed by timeless artists like BATHORY, KING DIAMOND or in a twist ofthe knive to old thrash metal legends like ONSLAUGHT, METALLICA early works or even TESTAMENT and ARTILLERY, making 'Alpha Noir' a truly surpring and fresh record where all the songs have a climax effect about them, an high tension charm that will for sure electricize audiences when played on a stage.

"Songs like the title track ('Alpha Noir'),the infectious 'Versus', the wolf hymn 'Lickanthrope' or the Portuguese sung 'Em Nome Do Medo' (In The Name Of Fear) and the closing epic 'Grandstand', might get you a welcoming chilling of the past but make no mistake: 'Alpha Noir' is a leap of faith and belief in their writing skills and progressive musicianship.

"Together with 'Alpha Noir' packed in a deluxe and special edition on digipack, MOONSPELL and Napalm offers no live DVD, making-of or any kind of filler. Instead they put in the table another offerend: 'Ómega White', the musical twin of 'Alpha Noir', a collection of eight songs of pure atmosphere and shadow, close to their breakthrough album 'Irreligious', in a just homage to their TYPE O NEGATIVE and SISTERS OF MERCY roots. Tracks like the erotic 'Herodisiac', the catchy 'White Skies' or the heartbreaking 'Whiteomega' will for sure keep you in dark company through a night of fear and loss, both soothing and provoking.

"Both masterpieces were produced and mixed by Tue Madsen, pre-produced by Benny Richter.

"Keep your watch and do not miss this new MOONSPELL record, for it is a true mortal sin to stay away from these eighty minutes of music, beautifully and violently craved by one of the most legendary and imaginative bands ever to surface the European scene. Do not forget to get your hands on this masterpiece and to watch the band live in the summer festivals around Europe. 'Alpha Noir'/'Ómega White' will also be played in their entirety in Lisbon's Campo Pequeno, that holds 5,000 fans, in their homeland Portugal in the most daring stage set and visuals the band has ever tried."

The band's latest album, "Night Eternal", entered the national chart in Portugal at No. 3 and in Germany at No. 62. The follow-up to 2006's "Memorial" was recorded at Antfarm studios in Denmark with producer Tue Madsen (THE HAUNTED, DARK TRANQUILLITY, HALFORD).