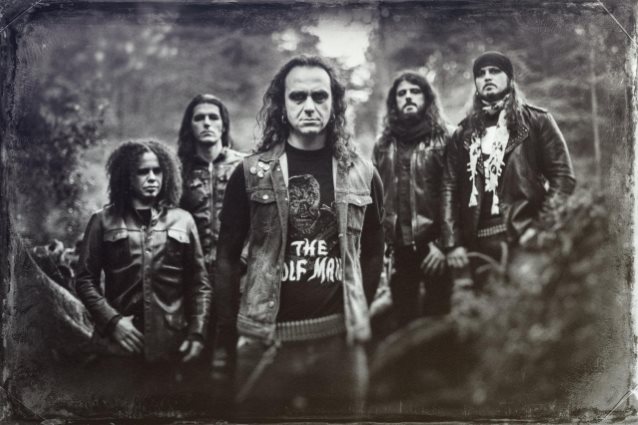 MOONSPELL will release "1755" on November 3 via Napalm Records. The disc is a Portuguese-language album about the 1755 Lisbon earthquake, also known as the Great Lisbon earthquake, which occurred in the Kingdom of Portugal. In combination with subsequent fires and a tsunami, the earthquake almost totally destroyed Lisbon and adjoining areas.

The Portuguese metallers have described the effort as "a poetic, musical and philosophical reflection of the band about the tragic event that took place on the 1st of November of 1755 in Lisbon, decimating the entire city.

"It's mostly a metal record, with vibrant riffs, epic orchestration and vocals and lyrics, which invoke the agony of that day. The band was also concerned in recreating the end of the 18th Century Lisbon and there will be lots of fusion, percussion and a melodic approach to that time and to the atmosphere the great city of Lisbon enjoyed back then.

"There will be ten powerful, surprising songs that echo remotely to some of MOONSPELL previous efforts like 'Under The Moonspell' or 'Alpha Noir'. But make no mistake! This is MOONSPELL as you never heard them before, with the fire of their native language Portuguese and 900 years of history to unveil!

"An historical, rigorous, serious, artistic record. A black beast from Portugal that the metal scene so craves for."

MOONSPELL vocalist Fernando Ribeiro said: "We fell in love with the concept and made perfect sense to sing it in our national language, Portuguese. I guess we were just waiting for the right opportunity to work on such an album. Musically, it will be heavier than 'Extinct'. It will be earthshaking but also very detailed with orchestrations and percussion as we want people to relive the Lisbon of the 18th Century. Singing it in Portuguese allowed me to find a different expression as a vocalist and my job is to be the survivor of the earthquake, roaming the ruins and telling you all about it."

In support of "1755", MOONSPELL will play three shows in Portugal to coincide with the album's release. They will have a double-date hometown show in Lisbon where you can enjoy the band's annual Halloween party as well as watch the performance. On November 1, MOONSPELL will take the event to the city of Porto, as part of the first three "1755" announced dates:

These very special gigs will be produced by the band themselves in partnership with Alma Mater Records and in collaboration and with total support from their main label, Napalm.

At the shows, you will have the chance to buy the upcoming record exclusively and straight from the band as you watch them destroy Lisbon and Porto. Each ticket holder will get a free CD or vinyl edition (first 500 tickets; the edition will be signed by the band!).

Says the band: "On these shows we're gonna play 1755 in its entirety but also recover some obscure stuff we haven't been playing for many years."