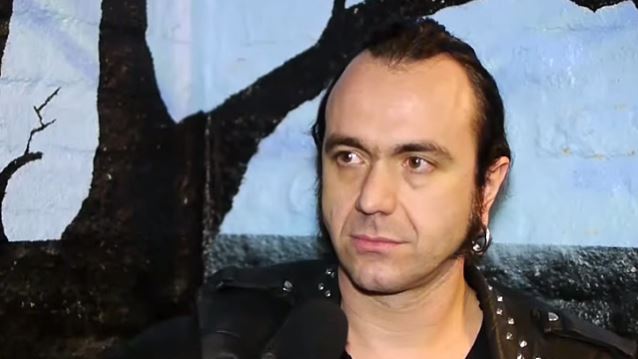 Vocalist Fernando Ribeiro of Portuguese metallers MOONSPELL was one of the 100 writers, musicians, scientists, actors, athletes, doctors, models, TV presenters and politicians who took part in "100 Men Without Prejudice", a Portuguese campaign against gender discrimination. As part of the campaign, Ribeiro was photographed wearing a pair of red high-heeled shoes from Luís Onofre, one of the most renowned Portuguese designers, who has a considerable list of famous customers.

The 100 pictures from the photo shoot were presented yesterday (March 8) on International Women's Day, and will be exhibited in the Centro Cultural de Belém in Lisbon, with free entrance from 10:00 a.m. to 6:00 p.m., until April 2.

Portugal's Máxima magazine will compile all 100 images into a book, which will then be sold, with all proceeds going to Associação Laço, an association dedicated to the fight against breast cancer in Portugal since 2000.

MOONSPELL will release its new album, "Extinct", on March 17 via Napalm Records. The CD was completed at Fascination Street Studio in Örebro, Sweden with producer Jens Bogren, who has previously worked with KATATONIA, AMON AMARTH, OPETH and PARADISE LOST, among others.