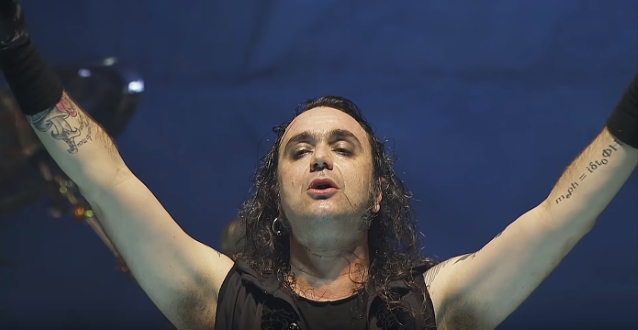 MOONSPELL's FERNANDO RIBEIRO: 'The World Would Be Better Off Without Religion'

Metal Wani's Katia K. recently conducted an interview with frontman Fernando Ribeiro of Portuguese metallers MOONSPELL. You can listen to the entire chat below. A few excerpts follow (transcribed by BLABBERMOUTH.NET).

On their new "Lisboa Under The Spell" DVD release:

Fernando: "After ten years without releasing anything of the kind because we just had a very old DVD, like ten years old that didn't represent, really, what the band is now, especially touring and especially being together for so many years. So, we decided to put together quite an epic collection of shows and to record it in our hometown. There's a lot of opportunities to make DVDs and with all due respect, you can make a great DVD at a festival, but for us, it wouldn't feel the same to call it a MOONSPELL show if it wasn't the show that is totally about our concepts, our records, our repertoire, also our fans. I think a lot of things came together and the ideas came together and I think we could make something that is quite remarkable for our career and for the fans as well. So far, the response is amazing. Everybody tells us that DVDs are not what they used to be, but, on the other hand, we are quite surprised. There's a lot of people who actually purchased the DVD and they really like it because they feel it's very complete and very different from what the other bands are releasing. I think that was quite a welcoming feeling for us. We definitely wanted to make something meaningful, not just MOONSPELL live at here or there, but something that shows more involvement to the band and let people know who we are on and off stage. That's quite important after so many years. Sometimes, the fans are complete strangers and they don't know how we react and they don't know how we behave and our convictions. I think the DVD is an important document for that proximity as well."

On whether there were any challenges in playing one of their studio albums in full like they did for the DVD:

Fernando: "It's not quite the same, but I have to say that MOONSPELL has always kept a very balanced setlist. It's not like we abandon our albums and never play them live. Every time, there are classic songs that definitely make it in our setlist regardless of the album or the new album where we are promoting 'Opium', 'Alma Mater', 'Vampiria', 'Full Moon Madness', so those songs were not, at all, far away for us. The other songs from 'Wolfheart' and 'Irreligious' that we quite rediscovered in a way like 'Live Crimes' and 'The Poisoned Gift', which were songs we never actually played so much. When 'Wolfheart' and 'Irreligious' were out, we were supporting bigger bands like MORBID ANGEL, TYPE O NEGATIVE, etcetera. Our setlists were short, so we played these songs from these albums very few times. Now, we can come to a place where we can definitely do a three-hour show and people still stay and people still want to be a part of it for so long. So, I think it wasn't hard, like a challenge. We still got it. I think it was more of a case to replay those songs and still, like with all of our vocal differences, musicianship differences. After all, it's 20 years since we wrote and recorded those albums, it sounds legit."

On the topic of euthanasia, which is debated by the band during one of the behind-the-scenes clips on the DVD:

Fernando: "It was debated at the time until the government didn't pass the law. It was like the case of, the laws are very subtle. After all, Portugal is a Catholic country, so there's still a lot of customs and manners that simply do not exist anymore in Central Europe. The debate here, sometimes, is not debated in the right place, which in my opinion, is medical and family decisions. People just debate different points and through the perspective of religion. That's why I was being so angry back there because I don't think religion should be something — of course the world would be better off without religion. Regardless, religion exists and faith exists and I can respect that, definitely, but it's hard for me to understand that you are deciding over the power of life or over death or the other way around based on something that is not completely or at all scientific or emotional in a true way of family ties. That was my angry point. Sometimes, the documentary, it's really a free-for-all, it's very random, it's our lives. But, I think [producer] Victor [Castro] wanted to show people that we listen to the radio and it's sometimes euthanasia, sometimes you step in shit and sometimes we just fuck with the other drivers because we're from Portugal. I think, actually, what we are doing here is not a new thing, but, when you look to musicians, social networking, etcetera, they do not really present themselves this. There's always a little bit of interesting situations or something and even when they are presenting themselves at home, it seems like everything is set up and everything is put together, even if the room is clumsy. [Laughs] We do not really like to do that as a personal choice. I think we were quite brave in having all of these cameras following us around. We gave the raw material to Victor, who can probably blackmail us for life and put into the story that he was there, he thought there was other events, a lot of other discussions, etcetera, that didn't make it into the film. But I think what he made was really what we are. Sometimes we are too old to make apologies, especially myself. I have strong opinions and I like to debate and sometimes, I'm a bit angry because I'm Portuguese and sometimes just people being annoying and stupid pisses me off. I'm sorry about that, but it's the truth. [Laughs] Some people will find it very aggressive, but all in all, I think the discussion about euthanasia in Portugal was really a waste of time because they turned it into a political, religious matter, which I don't think it is. That was my point back then."

"Lisboa Under The Spell" was released on August 17 via Napalm Records. The show was filmed at the Campo Pequeno arena in their hometown Lisbon on February 4, 2017. That inimitable bond between the gothic metal act and 4,000 of its fans in the sold-out venue is pure electricity, captured for all eternity on the massive live DVD/Blu-ray/3CD package. 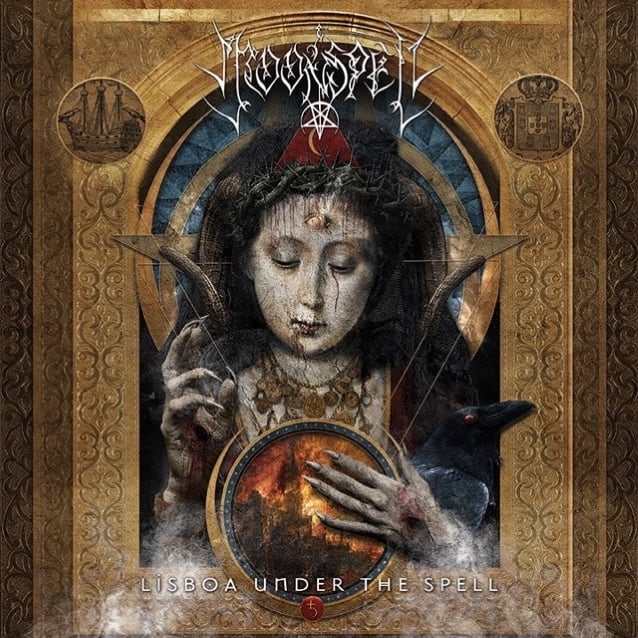