More shows will apparently be added to the tour.

MORBID ANGEL frontman Steve Tucker told the Toilet Ov Hell web site about the band's decision to not perform any songs from the David Vincent era of the legendary death metal outfit during the band's last U.S. tour: "Somewhere along the line, somebody put out there that we had said that we were only doing only this-era stuff from now on, and I think that did make a lot of people start to grumble; I would have grumbled too, dude — absolutely. But that's not what was said. It was one tour. It was one tour where it was, like… We started putting together, 'Okay, what songs are we gonna do live?' And, honestly, dude, when Trey [Azagthoth, guitar] and I started talking about it, I started stating the obvious songs — you know, 'Rapture', 'Pain Divine', maybe 'Blood On My Hands' — the songs that had always been part of the set. And Trey was just, like, 'Man, let's do something different, dude.' And until the very end, it wasn't that it ended up being all our era — that just ended up really being the songs… He asked me to pick songs, Scotty [drummer Scott Fuller] picked songs, he picked songs, and in the end, the songs that were all picked, man, they happened to be from that era."

Tucker, who is back for his third spell with MORBID ANGEL, continued: "I did one interview with a guy in Orlando, and he said, 'So, are you only gonna be doing…?' And I said, 'Well, it just so happens on this tour, we're only gonna be doing songs from this era,' and somewhere it got changed into 'from now on.' And that's not a fact, dude.

"I've always respected MORBID ANGEL's legacy — one hundred percent, absolutely," he said. "I love the first four MORBID ANGEL albums with every bit of me and my metalness. And I've always liked playing those songs. It's always kind of fun to be on stage with Trey playing a song like 'Where The Slime Live' or something — man, it's great. To be honest with you, those are great-ass riffs, they're Trey's riffs, they're things he wrote. It's MORBID ANGEL and we're never gonna stop playing all of that stuff. But the thing that we are gonna do is we're gonna mix it up — we're not gonna just keep playing the same songs that you've always heard. Yeah, you're gonna hear songs from 'Blessed Are The Sick' and from 'Covenant' and 'Altars Of Madness' and 'Domination', but it might not be the same song that you've heard every single time. It might not be the song that you've heard on tour the three, four, five other times that you've seen MORBID ANGEL. We're gonna play songs that maybe got put on the backburner a little bit somehow."

Tucker added: "When you're writing songs, you love all the songs or you wouldn't put 'em on the album. And somehow some songs end up being the ones that become a little more quote-unquote popular than others or considered classics.

In January 2017, MORBID ANGEL announced the addition of Dan Vadim Von (guitarist/frontman of the American death metal band VADIMVON) to the band's lineup on second guitar. He joined the group as the replacement for Norwegian guitarist Destructhor (a.k.a. Thor Anders Myhren), who left the band three years ago. 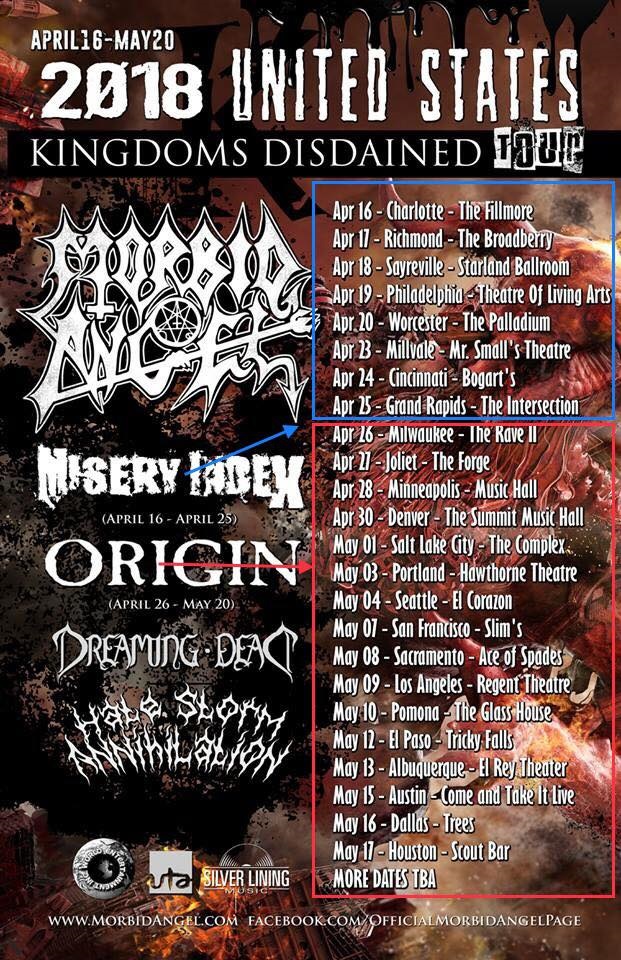