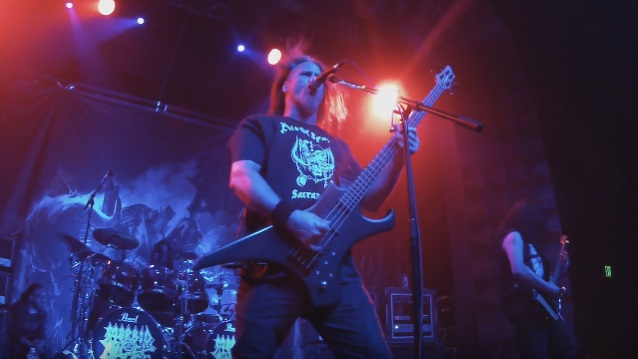 MORBID ANGEL's STEVE TUCKER On I AM MORBID: 'They're Not Creating Anything New'

MORBID ANGEL frontman Steve Tucker says that David Vincent's I AM MORBID project is "not creating anything new."

Tucker, who is back for his third spell with MORBID ANGEL, was asked in a new interview with The Jimmy Cabbs 5150 Interview Series if he feels I AM MORBID is "some form of a sabotage" or "some form of a distraction to divide the fanbase." He responded (see video below): "David was in MORBID ANGEL for many, many years, bro. There's people that absolutely love that dude, and with just cause. I was a David Vincent fan back in fucking 1991, '92, so I get it. But it seems to me that… I'd like 'em to make an album. And then maybe we'll talk about it. You know what I mean? Until that, they're just playing songs, dude. They're going out and doing shit from the past; they're not creating anything new. And I don't mean that as an insult. It's just factually based. People hate facts, but… fuck 'em!"

Last fall, Tucker told "The Classic Metal Show" that the current lineup of MORBID ANGEL had as much right to perform the Vincent-era songs as David did. "It's absolutely my opinion and a fact, if you wanna look it up yourself, that all those songs are not David's songs, dude — they're Trey's [Azagthoth, MORBID ANGEL guitarist] songs," he said. "Trey wrote most of 'em — I mean, almost every single one of 'em, to be honest with you. All those amazing riffs — they were [Trey's]. Yeah, David sang on 'em, but they were MORBID ANGEL riffs, and I guarantee you, in the end, Trey had every bit as much input [as], if not more than, David did. So, honestly, they're MORBID ANGEL songs, man."

Vincent told Ghost Cult that I AM MORBID is "very different from MORBID ANGEL. If you want to see a MORBID ANGEL show, you know where to go, but this isn't it," he said. "I'm only performing songs that I wrote [with I AM MORBID]. If I didn't write it, we aren't playing it."

Vincent added in a separate interview with Canal Metal that he lanched I AM MORBID as a way for him to continue performing classic songs that he was part of creating. "I wrote a lot of songs and there are some very important records and I'm not going to allow disagreements with former [bandmates] to change my ability to perform [MORBID ANGEL songs]," he said. "They're like children. Just because the parents get divorced, doesn't mean the parents don't care about them."