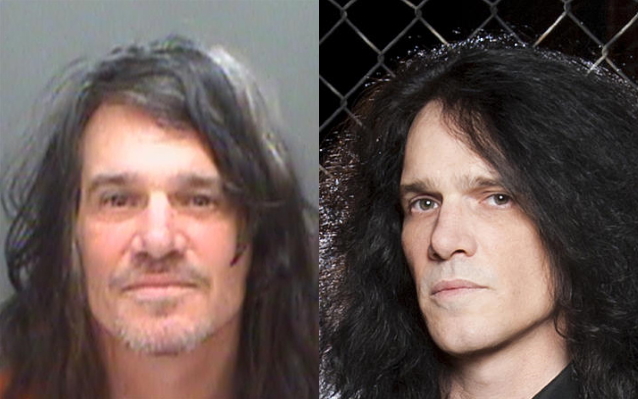 According to The Smoking Gun, MORBID ANGEL guitarist Trey Azagthoth told cops "I'm a professional drinker" after he was pulled over for speeding in Florida earlier this year.

The now-55-year-old musician, whose real name is George Emmanuel, was stopped by a sheriff's deputy at approximately 11:09 p.m. on January 1 for driving "at a high rate of speed in a 35 mph zone." After being collared, Emmanuel — who had "watery and glassy" eyes — performed poorly on a series of field sobriety tests. Additionally, his blood alcohol content was measured at .218 and .211 — nearly three times the .08 legal limit.

After being read his rights, Emmanuel "admitted to consuming 1-2 shots of whiskey prior to driving," according to an arrest affidavit obtained by The Smoking Gun. The guitarist also reportedly told cops: "I'm a professional drinker."

According to the Pinellas County Sheriff's Office, Emmanuel was arrested on a misdemeanor DUI charge and was released from Pinellas County Jail on January 2 at 9:21 a.m. on his own recognizance.

In a 1998 interview with Unchain, Trey was asked what part, if any, he felt drugs and alcohol played in his philosophy of purity of the flesh and spirit. He responded: "Well, for me... [pauses] like pot, I've always smoked pot. When I was younger, I did LSD and angel dust and all that kind of stuff. What it did was it distracted my mind even further from anything that was of the normal situation. It's mind expansion, I guess. It's distracting. It makes you look at things differently, makes you change your perspective. Not that I endorse it, because I wouldn't do any kind of acid today, because I don't know what it's made out of. As far as drinking, I'm just a very hyperactive kind of person, and sometimes when I drink a little bit, it just kind of smoothes things over so I can flow better with the playing and not be real rigid. Some of the playing has got to be rigid, like the pickings, but when it gets to the soloing and the stuff, it's more of a legato feel. It just smoothes things over for me. Pot opens up the feeling senses for me. Feeling the notes rather than looking at them with the mind and analyzing. There is no analyzing anymore. Analyzing for me is good for some things, but for other things, I think it's crap. To analyze with the mind, to rationalize notes and art is crazy. It's all about feelings, feelings from a higher source."

Born George Emmanuel III, Trey previously said that his stage name combines his status as "the third" in his family and the name of a Lovecraftian deity.