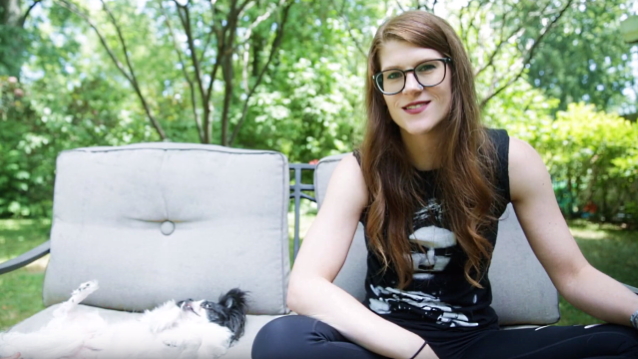 "Bods Mayhem Hour" recently conducted an interview with KITTIE frontwoman Morgan Lander. You can listen to the entire chat below. A few excerpts follow (transcribed by BLABBERMOUTH.NET).

Morgan: "It feels amazing. I have felt like in the last few years that I really wanted to create something, but I wanted to try to step outside of the box that I have been in in the past. This was a great opportunity for me, trying to find the right project. I actually have known the band for a number of years because Justine, the drummer, who actually played in BLACKGUARD, who toured together, we became really great friends and we kept in touch. I heard since she joined the band, all the progression that KARKAOS has made. Finally, when the time came, we actually had a good conversation about the potential for me to be joining the band. It took me a while to think about it. There is a little distance factor. They are a Montreal-based band and I live in Southern Ontario. It's a little bit far, but the way that technology works these days, you can make anything possible. It's really great to be working with someone who is a great friend of mine and is an amazing musician. All the people in the band are amazing musicians, so it's going to be a really cool and fun thing."

On how she's developed musically from the early days of KITTIE:

Morgan: "I think back to the music that was written for KITTIE, with the first album, I'm like 'Wow…' It feels so long ago. I feel so, almost detached from that, in the person that I was. Those songs were written when I was 14 years old. I'm 37 now. It's been a long journey, but I think along the way, there's been a lot of lessons that have been learned, both personally and musically, and I think even with the KITTIE catalog, you can hear the progression in the music, and in the subject matter and the musicianship in general. For me, I think joining KARKAOS, is kind of like the next logical step for that. But, yeah, there has been a lot of personal growth along the way as well, especially, I'd say maybe the last ten years of my life, both my professional life and my personal life, with KITTIE, and with everything that sort of happened in the last few years with that, and stepping outside the spotlight, really, and taking a step back. But then also, in doing the documentary and sort of having to go through all the things we had been through and relive them and speak to people from the past that hadn't really been in touch for a very long time. It was a very cathartic experience. Even in doing that, I feel like I've grown as a person and come to understand a lot of the things that happened in the past a little better and come to accept them and learn from those experiences as well."

KARKAOS entered Silverwings studio in August to demo and work on pre-production on eight new songs.

The band expects to record its next full-length this fall/winter for an early 2020 release.