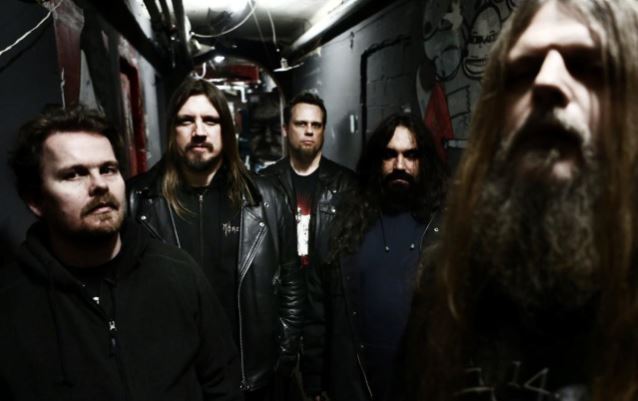 German death metal veterans MORGOTH will release their new studio album, "Ungod", on March 30 in Europe and April 7 in North America via Century Media. The CD will contain 11 tracks of dark and dismal death metal, combining the untamed ferocity of MORGOTH’s infamous EPs with the atmospheric density of the band’s two legendary full-length efforts, "Cursed" and "Odium".

Comments MORGOTH on the collaboration: "We are very happy to have worked with Seth for the cover artwork of the album.

"We knew it wouldn't be very easy to put the title 'Ungod' into a design that is vivid, brutal and aesthetic at the same time.

"We had received a couple of good different suggestions for the artwork, but Seth's simply was the one who pictured exactly what was already in our minds. It can roughly be described as God drowning in the void, killing its own creation and becoming the 'Ungod' — the dawn of the Antichrist."

A new track titled "Black Enemy" can be streamed using the SoundCloud widget below.

Comments MORGOTH: "After 18 years, we can finally present a first glimpse at our new full-length album, 'Ungod'!

"We started with the songwriting in January 2013 and finished the recording process by the end of December 2014.

"Our goal was to present some real MORGOTH-style death metal, which closes the gap between 'Cursed' and 'Odium'. We hope that we have achieved this goal and our supporters and friends will like the final outcome.

"The idea behind the song 'Black Enemy' is that this evil force rests within all of us and all we can do is trying to keep that beast under control. The 'Black Enemy' represents the dark and destroying part inside of us and the lyrics deal with someone who is not able to control it anymore, committing a murder in the end."

"Cursed To Live" was a documentation of MORGOTH's 20th-anniversary celebration of the band's all-time classic album "Cursed" (released by Century Media Records in 1991). It was released on CD, a limited DVD+2CD as well as a limited deluxe 2LP. The live show featured on the album was recorded at the band's triumphant show headlining Way Of Darkness festival 2011, at which MORGOTH performed an extensive set of 15 songs, with the main focus on the songs off "Cursed". The cover artwork — with an intentional nod to the original "Cursed" art — was designed by the renowned artist Dirk Rudolph (RAMMSTEIN, IN EXTREMO, APOCALYPTICA), who had also created the original artwork for "Cursed".