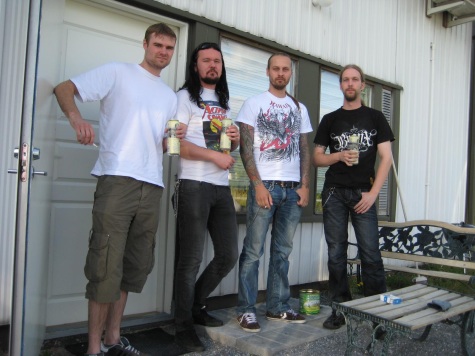 Finnish melodic death metallers MORS PRINCIPIUM EST have inked a deal with AFM Records. Singer Ville Viljanen states, "We talked to some other labels, too, but AFM seemed the right choice for us. We can't wait to get to the studio in the summer and release the new album at the end of 2012. And then we will see what happens, when the people of AFM starts to work their magic." He adds, "We have been talking with a record label for Japan, Korea and Taiwan release, everything seems OK, but nothing has been signed yet. Also have been talking to a record label for Australia release, again everything seems OK, but nothing has been signed yet. So, as soon as the contracts have been signed, we will let you know."

MORS PRINCIPIUM EST's third album, "Liberation = Termination", was released in February 2007 via Listenable Records. The follow-up to "The Unborn" was recorded at Astia Studio in Finland and was mastered at Imperial Mastering in Concord, California.