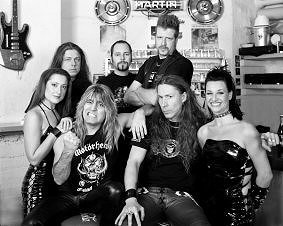 "Euro Metal Tour 2003", the Scandinavian dance/metal extravaganza staged by Swedish eurodance star E-TYPE and his current backing band, which includes MOTÖRHEAD drummer Mikkey Dee and ex-HUMANIMAL/GREAT KING RAT guitarist Pontus Norgren, had a successful kick-off last weekend at Valand in Gothenburg and is presently making its way to other parts of Sweden. Check out a band photo here and live photos from the Gothenburg gig here.

As previously reported, the two-month trek, which will see the group perform "thundering heavy metal" versions of all the biggest E-TYPE dance hits, will run through early March.

E-TYPE has been one of the country's most successful artists over the past decade, with record sales in the million range. E-TYPE (real name Martin Eriksson) himself was a metal drummer in the Eighties, playing with the thrash/power metal combo HEXENHAUS. Now he has decided to return to his roots by turning his eurodance songs into guitar-laden heavy metal numbers and performing them live.