The legendary rock and roll band MOTÖRHEAD was presented with a golden disc award by its label Steamhammer/SPV for German sales in excess of 25,000 copies of the band's 2001 DVD, "25 & Alive - Boneshaker". The award presentation took place on July 4 in Berlin at the Zitadelle, where MOTÖRHEAD performed to 5,000 fans alongside ROSE TATTOO and DANKO JONES. (See photos below.)

MOTÖRHEAD will release its new album, entitled "Motörizer", through SPV Records on the following dates:

As previously reported, the life and career of Lemmy Kilmister is being celebrated in a new documentary, tentatively titled "Lemmy" and slated for release in 2009.

The film promises fans more access than ever before to Kilmister's life, and includes interviews with past and present bandmates and such peers/admirers as Slash, Dave Grohl, THE CLASH's Mick Jones, Alice Cooper, Steve Vai and wrestling superstar Triple H. 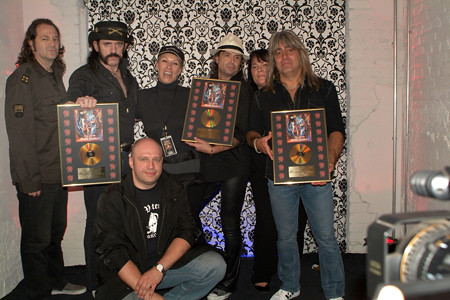 Backstage in Berlin (from the left to the right): Lemmy Kilmister (MOTÖRHEAD),Phil Campbell (MOTÖRHEAD) and Mikkey Dee (MOTÖRHEAD) (Photo by: Marcus Ewers) 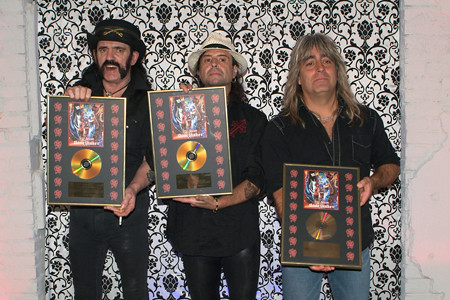