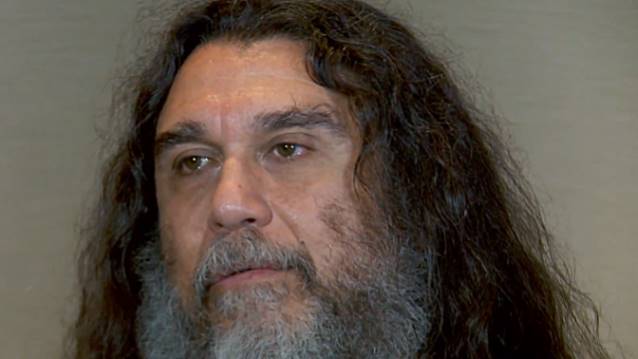 According to a posting on SLAYER bassist/vocalist Tom Araya's wife Sandra Araya's Facebook page, his mother passed away on Thursday, April 2.

Sandra Araya writes: "Today is a sad day for our family. Tom's mom, Tina, passed away [on Thursday]. We appreciate all the calls, text and messages. My handsome and children have taken the news hard. She was a wonderful woman full of love and life. You will be missed deeply."

A native of Chile, Tom Araya told NBC Latino in a 2012 interview that he tried to keep his Latin roots alive with his two teenage kids. "I always speak to my mom in Spanish even though she is fluent in English and she speaks it to my kids in hopes that they pick it up," he said. "My wife is always telling me you need to teach them so they can communicate with her."

Born Tomás Enrique Araya Díaz in Viña Del Mar, Chile, he arrived in 1966 with his family at the age of 5 and grew up in Southern California. He was raised a Catholic and is still practicing. His parents, however, weren't too thrilled with SLAYER's penchant for satanic lyrical imagery.

"My parents, like my bandmates' parents, were all very supportive since the beginning," Tom told NBC Latino. "They all knew their sons. As a kid. I did my first communion. They didn't like it, but they understood it. I found out later in life after my father passed away that he did face some negativity from the church community, but he never told me, I wish he would've, but he didn't, and that made me very sad."

Asked in a 2010 interview with The Austin Chronicle if his parents "got" what SLAYER was doing with its music and lyrics, Araya replied: "That's the one thing that's very special about this band — our families. Not only my family, but Jeff [Hanneman, guitar], Kerry [King, guitar], and Dave's [Lombardo, drums] family."

He continued: "When the band first came together, [our] parents would come to our shows and watch us perform at the Hollywood clubs that allowed us to play. They had an idea what the band was about and the style of music we were playing.

"As far as a big audience, my parents got an opportunity to witness that in 1990, when we did a show at the L.A. Sports Arena, which was sold out, 13,000 people. It was us and TESTAMENT. They were able to witness the extent of the audience that we have. And then, of course, when we played Chile, I flew them there so they could be a part of our first show ever in Chile."

Tom added: "My parents were very supportive of the band. In recent years, it's basically been my family coming to shows, with some of Kerry's older siblings also coming out."