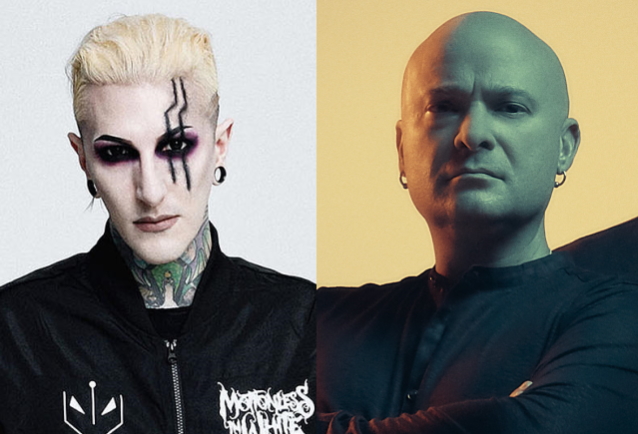 In a new interview with Meltdown of Detroit's WRIF radio station, MOTIONLESS IN WHITE frontman Chris "Motionless" Cerulli was asked if there were any musicians he tried to get to guest on the band's upcoming album, "Scoring The End Of The World", who weren't able to make an appearance. He responded (as transcribed by BLABBERMOUTH.NET): "This is a really amazing story for me, and I don't know whether or not he would want this to be known, but interestingly enough, for the song 'Meltdown', I reached out to David [Draiman] from DISTURBED. Because I felt like although the song is not exactly — it doesn't sound very much like a DISTURBED song, there's something about it that I felt like his voice would really take this song to a level that would be insanity. I feel like the song has elements of that early DISTURBED kind of electronic industrial stuff. So we reached out. And I was met with a really cool fanboy moment. Whereas most people just have their management say they're not available, he wrote an e-mail back directly to me saying very nice things about the band and me. And I was reading this, and I was, like, 'Is this real?' I know that he's really supportive of new bands — he's not one of those jaded, 'nope' kind of dudes. And I read that, and it inspired me so much to see people that paved the way for our band to be what we are… I don't know. It blew my mind."

Chris went on to say that David "wasn't able to" guest on the new MOTIONLESS IN WHITE album because DISTURBED "were working on their new stuff and he didn't wanna get pulled away from that, understandably, but just getting that note back was better than even having him on the song. So it was really awesome."

According to Cerulli, Draiman went a step further in voicing his support for MOTIONLESS IN WHITE. "Not long after that, he tweeted about a few of the bands that are on the radar now, like NOTHING MORE and, I think, POP EVIL, us, and a few others, and it was just, like, man, this guy recognizes his influence and his voice and he's using it to support music and rock," Chris said. "And that is such a cool thing to see."

Due on June 10 via Roadrunner, "Scoring The End Of The World" is available to pre-save on all streaming platforms, with exclusive merch bundles available for pre-order in the band's official store.

Earlier this month, MOTIONLESS IN WHITE released the "Scoring The End Of The World" title track. Prior to that, the band shared "Slaughterhouse", featuring KNOCKED LOOSE's Bryan Garris, as well as "Masterpiece" and "Cyberhex", the official videos for which quickly trended Top 10 on YouTube and have since amassed over eight million views.

"Scoring The End Of The World" marks MOTIONLESS IN WHITE's first full-length body of work since 2019's "Disguise". The latter has quietly made a major impact on rock music and culture. The single "Another Life" stands out as MOTIONLESS IN WHITE's most-streamed song ever with over 23 million YouTube views on the music video.