MÖTLEY CRÜE is celebrating the 30th anniversary of its landmark album "Dr. Feelgood". With charting hit singles including "Dr. Feelgood", "Kickstart My Heart", "Without You", "Don't Go Away Mad (Just Go Away)" and "Same Ol' Situation (S.O.S.)", "Dr. Feelgood" has been the band's biggest album to date. The record has sold more than six million copies in the U.S. alone going six times platinum, is certified three times platinum in Canada, gold in the U.K. and in Switzerland and spent 109 weeks on the Billboard 200 chart, peaking at No. 1. The band also earned Grammy nominations for "Dr. Feelgood" (1990) and "Kickstart My Heart" (1991) in the "Best Rock Performance" category and won "Best Hard Rock/Heavy Metal" album for the record at the American Music Awards (1991).

In addition to being the biggest album of the band's career, "Dr. Feelgood" has had a tremendous effect on pop culture. Inspired by bassist Nikki Sixx's near-death overdose, the autobiographical "Kickstart My Heart" dives into the band's sobriety. Over the last 30 years, Sixx has used his platform to be a part of the drug awareness and recovery conversation, an issue which continues to be relevant today more than ever.

Says Sixx: "After feeling robbed of a No. 1 album with 'Girls Girls Girls', the band was hell bent on topping ourselves on every level. Bringing in Bob Rock to produce and push us musically and lyrically was just what the doctor ordered… The band was clean, lean and sober and this album has some of our proudest work."

MÖTLEY CRÜE has not only influenced musical trends, but has also played a key role in the fashion culture of the '80s. Their iconic imagery continues to be a staple with rock apparel and fashion brands. In honor of its 30th anniversary, and in response to the frequent call from fans for more classic MÖTLEY CRÜE, an anniversary line of "Dr. Feelgood" apparel featuring the album's iconic artwork will be available. Furthermore, on December 20, a 30th-anniversary edition is being released featuring new CD and vinyl packaging as well as a deluxe edition including colored vinyl, three seven-inch picture discs, Dr. bag, deck of cards, prescription notepad and drumstick pens, pins, guitar picks, band aids, and more.

For all offerings, please visit www.motley.com.

The big "Dr. Feelgood" anniversary comes on the heels of the band's big comeback announcement #MotleyCrueIsBack. Spurred on by the hugely successful Netflix biopic "The Dirt" which tells the cautionary tale of the world's most notorious rock band, the comeback is for the new generation of fans created by the biopic. The movie they thought would never get made is confounding all of the critics, as MÖTLEY CRÜE finds a new audience, which has given "The Dirt" a 95% audience rating on Rotten Tomatoes. "It's great seeing another new generation discovering this classic album since our hit movie "The Dirt" on Netflix..." adds Sixx. The film is based on the band's 2001 biography by the same name. After the movie launched earlier this year the book re-entered the New York Times Top 10 bestseller lists 18 years after its original release.

Viewers of the movie took to Shazam, Apple Music and Spotify to discover/re-discover MÖTLEY CRÜE's catalogue. The momentum of the film caused rapid growth with Google searches increasing by 4300% and sales going up by 2000%, with albums including "The Dirt Soundtrack", "Dr. Feelgood", "Too Fast For Love" and "Greatest Hits" charting on iTunes since the release of the film.

Fans can also listen to "The Dirt" as an audiobook now for the first time. Like the movie, the book/audiobook gives fans glimpses into the band's crazy world of backstage scandals, celebrity love affairs, roller-coaster drug addictions, and immortal music. The autobiography of Tommy Le, Nikki Sixx, Vince Neil and Mick Mars features the full spectrum of sin and success, as well as a cautionary tale about the rock 'n' roll lifestyle. 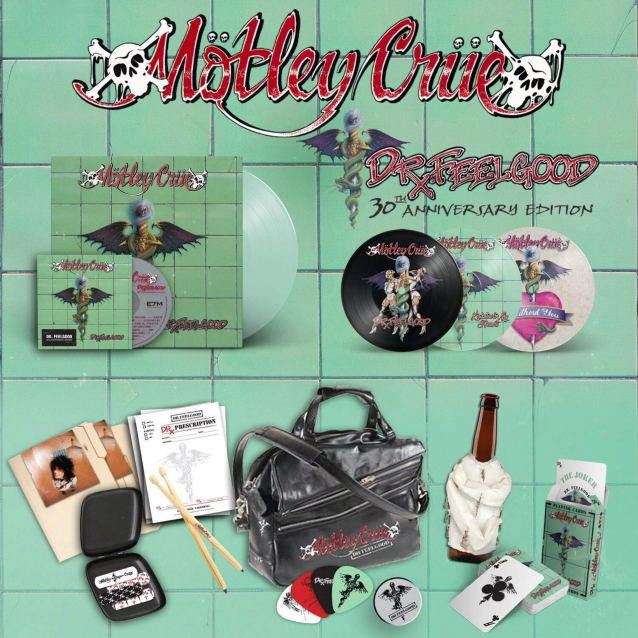