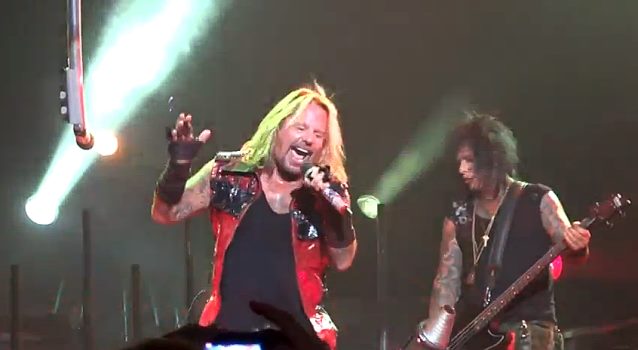 MÖTLEY CRÜE kicked off its second residency at The Joint at Hard Rock Hotel & Casino in Las Vegas last night (Wednesday, September 18). Fan-filmed video footage can be seen below.

To celebrate the opening of MÖTLEY CRÜE's second residency, the band will take part in its first Reddit Ask Me Anything session this Friday (September 20) at 3 p.m. EST/12 p.m. PST.

If you have a question for MÖTLEY CRÜE, join the conversation on Friday at this location.

The fall shows, dubbed "Evening In Hell", are an all-new production and the band is pushing its own envelope once again. The production was designed exclusively for The Joint in partnership with AEG Live and sees the band performing in front of just 4,000 people per show max, a far cry from the arenas MÖTLEY CRÜE is accustomed to playing.

"There's a lot of cool stuff we're going to use this time," MÖTLEY CRÜE singer Vince Neil told Vegas.com about the band's return to Las Vegas. "Technology changes so rapidly and new stuff comes out all the time. All of a sudden someone goes, look at this, and we go, 'Holy shit, that's cool.'

"We have to outdo ourselves every time we put something new together. This one — I don't know how we're going to top this one. There's some crazy stuff going on in this thing and just a lot of fire and smoke and monsters and all kinds of cool stuff."

Bobby Reynolds, vice president of booking for AEG Live, told USA Today: "[MÖTLEY CRÜE have] been around so long because they're just a great live band. They put together a brilliant show every time, they always wow their fans, there's always something extra to see at a MÖTLEY CRÜE show. You're always going to see something that surprises you. If there's another band that puts together such a great mix of theatrics and stunts and production and pyro and then really fun songs, I don't know who they are."