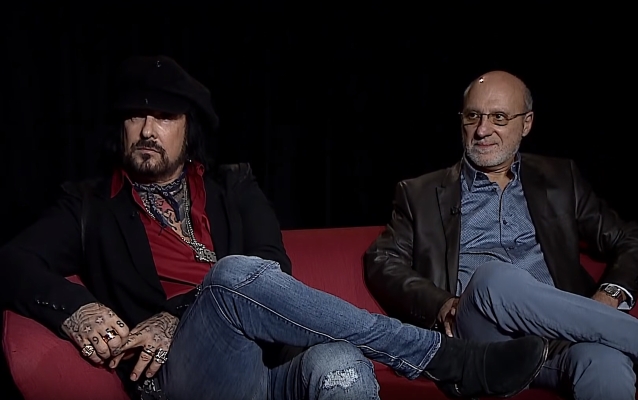 Pete Mitchell of U.K.'s Virgin Radio recently conducted an interview with MÖTLEY CRÜE bassist Nikki Sixx and manager Allen Kovac about the band's new biopic, "The Dirt", which is based on CRÜE's 2001 New York Times bestselling autobiography. You can watch the entire interview below. A few excerpts follow (transcribed by BLABBERMOUTH.NET).

On the journey to release "The Dirt" on film after it was published in 2001:

Allen: "The concept of the book was to find a book company that would let us tell a lot of story. We had met Judith Regan who was a controversial publisher and she was with HarperCollins. She said, 'What are you thinking?' I said, 'Have you ever had an artist sign that once they gave the interview, they couldn't change anything?' And she said, 'No.' I said, 'What if we had four different buses and we got Neil Strauss, who we all know, to take everyone's version and then we leave it as is, and see what a rock and roll band really is, which is a train wreck?' She loved it. But HarperCollins was very concerned about lawsuits, so they asked if we would indemnify them, which we did. We indemnified the book company against any lawsuits. Anyway, long story short, because of that, you have a real rock story. And that's why we called it 'The Dirt'. There was no Internet back then. We were trying to come up with a marketing concept. I've always worked with Nikki and the band on… You wanna get out there, and you don't have to do it conventionally. We were sitting around and coming up with ideas, and I threw out, 'What if we sent books to every rock festival and asked the promoters to put the book in all the stars' buses?' With artists having to drive all the time, they get bored. So they all read the book. Social media back then was the tribal experience of an arena or a club or a theater, and they would tell the fans, 'You've gotta get this book. I've never read a book that actually put this stuff in it.' And all of a sudden, the book became a bestseller, and it just kept selling and selling until it became the biggest rock book, or music book, ever sold. And at that point, Tom Freston, who was CEO of MTV, part of Viacom, which was Paramount, optioned the book. And then the problems started. You go to a corporation, they wanna make a different movie than the book, and after about seven years and six different heads of production, we agreed to disagree and we moved to Focus Films. And then Focus Films gave us another five years of, 'Yes, yes, yes. We'll do it. Oh, we're not sure.' And then finally, we settled on Netflix, and they've been great."

On how MÖTLEY CRÜE originally became a hot commodity without major label backing:

Nikki: "Nobody would sign us. So we just looked at the bands that came before us, like the DEAD KENNEDYS, FEAR, etcetera, etcetera, in the punk scene. And we formed our own record company called Leathür Records, got a distribution deal with a company called Greenworld. And we just started distributing around Los Angeles. We got distribution outside of Los Angeles, but, really, no one heard of the band. We got to the point where we were doing multiple nights in clubs. And then I had this idea to start playing civic arenas and putting on big shows. There was a lady named Elvira. She was a really famous, haunted character of these horror movies. So we got her for a hundred dollars, which was like a hundred thousand dollars to us, to intro our show. And we played a show called 'New Year's Evil'. We got this guy that had hot rods to put funny cars onstage. And we were always trying to up the show. So now we're selling two and three thousand seats everywhere we play, and still no one would sign the band, because we didn't fit in. And we kept saying, 'Isn't that the point?' It was to not fit in. And eventually, that record ['Too Fast For Love'] sold 40,000 copies, and Virgin was really interested in us, and a guy named Tom Zutaut, who was with Elektra Records. And the decision to go with Elektra Records was simply because they were on La Brea [Avenue in Los Angeles], and we could go down to the offices anytime we wanted. They didn't like it. A guy named Joe Smith signed the band. And then when Joe left, a guy named Bob Krasnow came in and he wanted us off the label. And I think that if we would have not signed with a Los Angeles label, we probably would have got dropped. We went there all the time. We went to Zutaut's office. We were constantly going in there with new songs, demos, pushing, pushing. We didn't know any better. Artists like that would drive Allen crazy."

Nikki: "We formed January 17, 1981… There was a weird frenzy about this band… When you're young, you don't know how to control that… You're young. You're looking at your heroes, and you're, like, we're on the same path. We're going downhill, our car is on fire and it seems good until you hit the brick wall."

Allen: "I don't think you're on the same path. THE BEATLES glamorized acid. You had Keith Richards [THE ROLLING STONES] glamorizing heroin. These were kids. And the success happens, but you're also in the era of excess. People are doing blow while they're doing disco. Everybody is excessive, and all of a sudden, these guys, who always wanted to differentiate themselves, decide, 'We're gonna be crazier than everyone else.' The movie deglamorizes it. And I think it's the first movie where rock stars are talking about the downside, the very dark downside. I think that's one of the takeouts of this movie — that artists today have a responsibility to know the damage that they can do to themselves but also to their audience, whether it's hip-hop or it's Demi Lovato OD'ing recently. I think that's where this film is really important for music and pop culture."