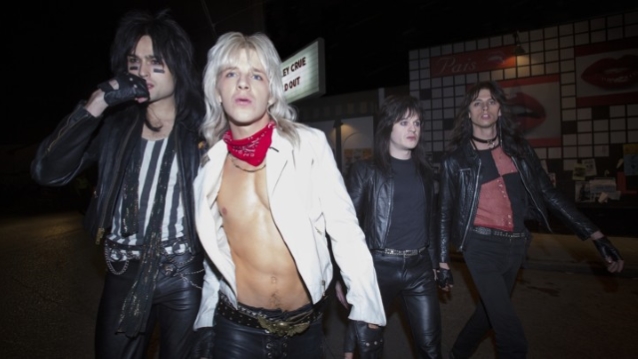 MÖTLEY CRÜE bassist Nikki Sixx has dismissed the influx of negative professional critic reviews the band's biopic "The Dirt" has received, insisting that the fans love the movie.

He tweeted on Friday: "The album is number #1.The fans are going crazy over #TheDirt. The critics hate it. @MotleyCrue @netflix WORLD FUCKING WIDE."

"The Dirt" currently has an 86% audience score from 324 reviews on Rotten Tomatoes, an online review aggregation service that allows the public to score the movies alongside critics. It has a 42% critic score from 36 reviews on the same site.

"For all the unique details of their story (and their sound),QUEEN's big screen bow was so generic that it felt like Bryan Singer was trying to gaslight everyone into forgetting that 'Walk Hard' had already reduced this entire genre to a joke," Ehrlich wrote. "And for all the legendary hedonism that defined their lives, MÖTLEY CRÜE's movie feels like it could have been made about any one of a zillion other bands. Hell, it could even have been made about QUEEN!"

Los Angeles Times called "The Dirt" "horribly timed," "astoundingly tone deaf" and "as vapid and misogynistic as the band members and the book they wrote with author Neil Strauss."

The Daily Beast said that "The Dirt" "spends almost two hours glamorizing shitty behavior, and then attempts to exonerate its stars with a few vague voiceovers about regret and rehabilitation."

The Atlantic wrote: "The danger of a document like 'The Dirt' is in showing pigheadedness as not only fun and cool, but also elemental, inexplicable, and unstoppable."

Deadline wrote that "The Dirt" has been "bleached pretty clean from its feral and self-admitted sordid source material," citing frontman Vince Neil's drunken car crash that killed HANOI ROCKS drummer Razzle and the death of his daughter after a battle with cancer as "rare exceptions in this straight to MOR movie that has a limited emotional range outside of party time."

The New York Times concurred, saying that screenwriters Rich Wilkes and Amanda Adelson had "sanded it down to a junior varsity 'Bohemian Rhapsody'."

Some media outlets were kinder in their assessments, with Decider writing: "Lower your expectations, throw caution, decorum and good taste to the wind, and file it under 'guilty pleasure.'" The Guardian praised the performances of actors Douglas Booth (who plays Nikki Sixx),Iwan Rheon (who plays Mick Mars) and Daniel Webber (who plays Vince Neil),saying that they "possess similar abilities to navigate between charm and repulsion, all working together to create such a chummy group that their power as an ensemble elevates the material. Just like their real-life counterparts."

"The Dirt" movie, which was helmed by "Jackass Presents: Bad Grandpa" director Jeff Tremaine, was picked up by Netflix after being previously developed at Focus Features and before that at Paramount.

"The Dirt Soundtrack" accompanies the movie and features a collection of MÖTLEY CRÜE classics that meaningfully underscore significant moments that shape the film. Exclusive to the film's soundtrack, MÖTLEY CRÜE recorded four new songs, including the single "The Dirt (Est. 1981) (feat. Machine Gun Kelly)", "Ride With The Devil" and "Crash And Burn", plus a cover of Madonna's "Like A Virgin".

The album is number #1.The fans are going crazy over #TheDirt. The critics hate it. ✔️🖤🧨👍🏽 😂💀 @MotleyCrue@netflix WORLD FUCKING WIDE