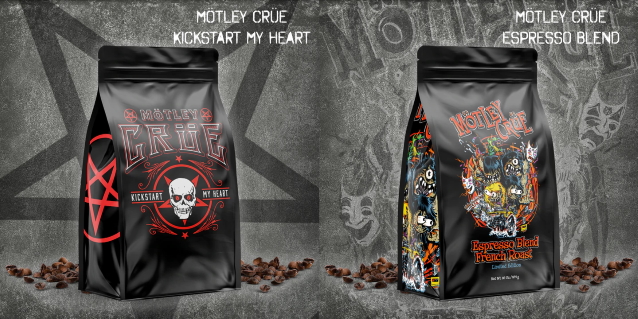 MÖTLEY CRÜE Now Has Its Own Coffee Brand

MÖTLEY CRÜE has teamed up with Brewtality Coffee Co. to help you kickstart your mornings with a rich-flavored high-caffeine, high-octane blend dark roast, and espresso blend French roast.

Kickstart My Heart is a dark roast coffee with a bold, smooth and never bitter taste, that you will instantly want to rock out to.

Espresso Blend French Roast will get your taste buds buzzing, with notes of dark chocolate, brown sugar and toffee.

A short promotional video for MÖTLEY CRÜE's new line of coffee, featuring the band's drummer Tommy Lee, can be seen below.

In a classic 2000 episode of "MTV Cribs", Lee revealed that he had his own professionally installed Starbucks cappuccino machine at his home. Two years ago, he confirmed to the "Paltrocast With Darren Paltrowitz" podcast that he still owned the machine. "Of course it's still here," he said. "Yes, Starbucks is actually right next to the studio door. It's right outside [my home] studio.

"I lived up in Malibu at the top of Mulholland, and to go down to Starbucks was literally a 20-minute trek down to Starbucks and 20 minutes back," he explained. "That's like a 40-minute run to get a frickin' coffee. I think I was complaining one day because I was tired of doing that and I was complaining to my accountant and I was, like, 'I would just kill if there was a Starbucks that was closer, or I had one in my house.' I was just bullshitting, really, and he goes, 'I represent several of the Starbucks chains, let me make some phone calls and see if I can get the people who do the installs with the machinery.' He made a couple of calls, and boom, they came over and installed the machines and the grinders and the pump flavors, you name it. The whole deal — they brought me the green Starbucks apron… It's a legit Starbucks down here. It's crazy."