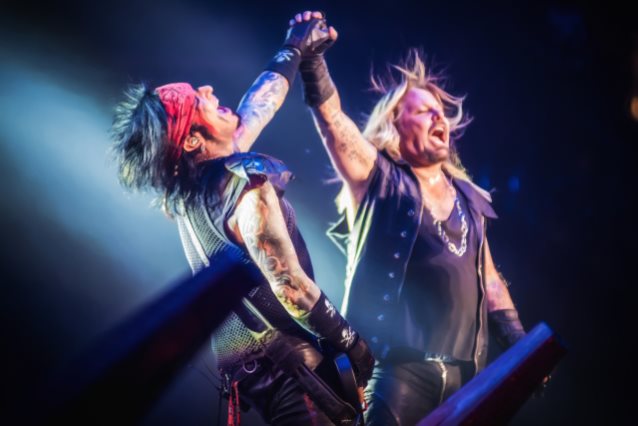 On December 31, 2015, legendary rock icons MÖTLEY CRÜE completed their 35-year touring career as a band with a spectacular final concert at Staples Center in their hometown of Los Angeles, California, just 10 miles from the Sunset Strip where the band's infamous and decadent career first launched. The band thrilled the sold-out arena with performances of such mega-hits as "Kickstart My Heart", "Girls, Girls, Girls", "Home Sweet Home" and "Dr. Feelgood". While not everyone was able to see their final show live, CRÜE fans can now catch all the action when Fathom Events, Live Alliance, Eagle Rock Entertainment and Tenth Street Entertainment present "Mötley Crüe: The End" in select U.S. cinemas on Tuesday, June 14 at 7:00 p.m. local time for only one night. In addition to the epic concert footage, cinema audiences will be treated to behind-the-scenes footage of the band's last global tour.

Tickets for "Mötley Crüe: The End" can be purchased beginning Friday, May 13 online by visiting FathomEvents.com or at participating theater box offices. Fans throughout the U.S. will be able to enjoy the event in nearly 250 movie theaters through Fathom's Digital Broadcast Network. For a complete list of theater locations visit the Fathom Events web site (theaters and participants are subject to change).

Known for their over-the-top production, MÖTLEY CRÜE did not disappoint for their last show ever on New Year's Eve: from massive, cutting-edge pyro, including Nikki Sixx's bass guitar spitting fire over 30 feet into the air, and Tommy Lee's "Crüecifly" drum roller coaster, amongst many other spectacular elements. Lead singer Vince Neil delivered an emotional "thank you" speech to the audience, while the band supplied next-level, high-octane fueled energy, ringing in the New Year on stage with thousands of balloons raining down on the crowd. The grand finale of the show included a blow-out performance of their hit single, "Kickstart My Heart" with Nikki Sixx and Vince Neil floating above the audience in far-reaching "cherry-pickers." Leaving fans in tears, the show concluded with an emotional encore rendition of "Home Sweet Home" from the second stage riser in the center of the audience.

Fathom Events CEO John Rubey said: "We're excited to bring the opportunity for MÖTLEY CRÜE's legion of supporters to experience their final show and relive the magic one more time. Filled with their hard-rock anthems and unforgettable stage presentation, this show is not to be missed."