MÖTLEY CRÜE's "The Stadium Tour" with DEF LEPPARD, POISON and JOAN JETT & THE BLACKHEARTS has been officially postponed until 2022.

The postponement was announced in a joint statement from the entire tour lineup and first shared by CRÜE singer Vince Neil via Instagram.

The statement reads as follows: "To all our loyal fans, we wanted to let you know that we learned today that the tour is getting moved to 2022.

"This is the only way to ensure that we can play ALL of the dates for ALL of you who have purchased tickets. We appreciate you hanging in there and can’t wait to get back on stage and bring 'The Stadium Tour' to all of our fans.

"It is going to be one for the history books!"

Prior to the latest postponement, "The Stadium Tour" was slated to kick off on June 19, 2021 in Nashville, Tennessee and conclude on September 12, 2021 in San Diego, California.

In January, DEF LEPPARD guitarist Phil Collen told the "Jeremy White Podcast" that he was "really confident" "The Stadium Tour" would take place in 2021 provided that the COVID-19 vaccine was successfully rolled out. "It's the same way anywhere around the world," he said. "You go, 'Hey, are you coming to so and so?' Well, I don't know if we're allowed to travel and whether we would be allowed on the plane or even in that country. So, it's looking good — or not. We really don't know. It really comes down to how everyone deals with approaching this pandemic and stuff." 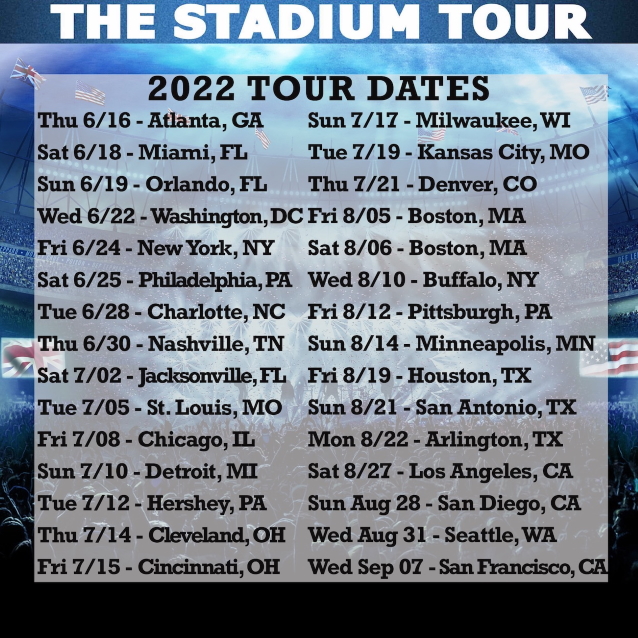 To all our loyal fans, we wanted to let you know that we learned today that the tour is getting moved to 2022. This is...