MÖTLEY CRÜE drummer Tommy Lee told Billboard in an April 1 interview that the band's "The Stadium Tour" with DEF LEPPARD, POISON and JOAN JETT & THE BLACKHEARTS is "still a go" despite the fact that most concerts, festivals, film and TV shoots, and other events have been canceled, rescheduled or modified as the world battles the ongoing coronavirus pandemic.

"We're all in constant communication," Lee said. "[Bassist] Nikki [Sixx] and I have been in several production meetings. You're talking multiple stadiums, so it's like two kids in a candy store putting together something people are going to walk [away from] saying, 'Are you fucking kidding me?!' That's our mission right now, and it's definitely headed in that direction."

Lee also said that he is "fuckin' pulling my hair out" over his trademark drum stunt, which he hopes to top on the upcoming trek. "What am I supposed to do at this point?" he asked rhetorically. "I literally have done the impossible — and all of it. Do I shoot myself out of a fuckin' cannon? At a stadium, there's no ceiling. There's nothing to hang from, so there's a bunch of issues we've been talking about, trying to get around a lot of that. It's fucking crazy town, dude."

He added: "By the time all this fucking apocalyptic bullshit is over, I think everyone's going to be in a really good mood to go out and have the fucking best time ever. I really do. I hope everyone stays inside, and we can get a fucking grip on this and get back to people having their normal lives."

"The Stadium Tour" is currently scheduled to kick off on June 18 in Jacksonville, Florida. The 31-date trek will mark CRÜE's first live dates since wrapping its 2014/2015 farewell tour. The band toured with POISON back in 2011 and DEF LEPPARD teamed up with POISON for a string of road dates in 2017 — but the upcoming jaunt marks the first time all four acts have hit the road together for an extended tour.

Last month, Lee said that he would use the coronavirus downtime to "get locked down" in his studio and "create." 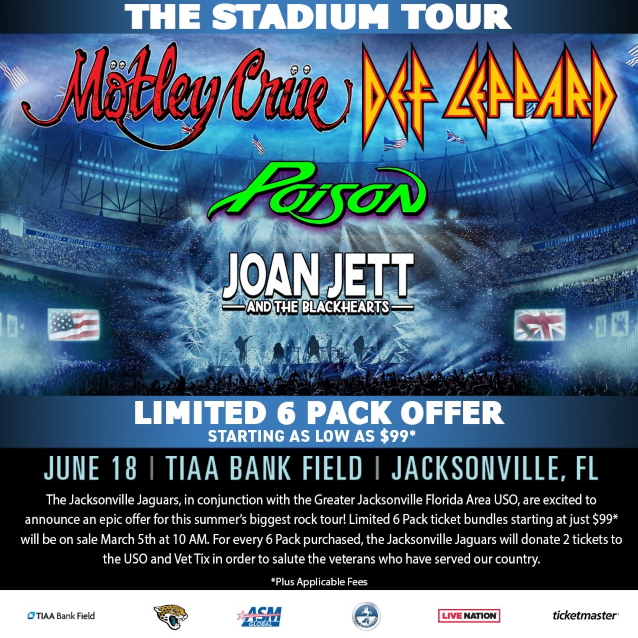