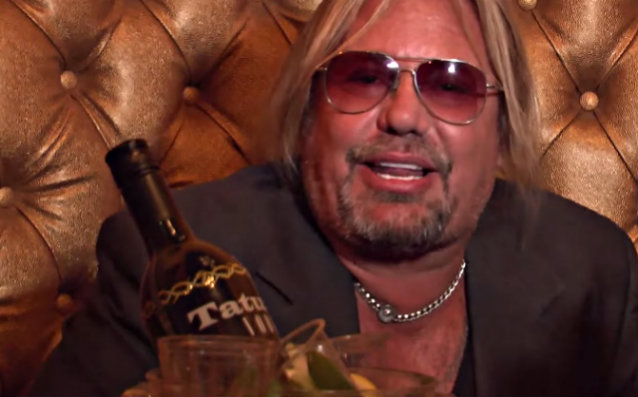 VegasNET.tv's new media producers Maria Ngo and Ray DuGray recently hung out on location with MÖTLEY CRÜE frontman Vince Neil for an exclusive, behind-the-scenes interview at the singer's Tatuado Eat Drink Party restaurant and bar inside Circus Circus in Las Vegas, Nevada. You can watch the chat below.

Asked where his entrepreneurial spirit comes from, Neil told VegasNET.tv: "I guess it started many years ago where… The thing is, music is great, but I started in wines, like, maybe 20 years ago, and had part of a vineyard and we made some great cabernets and some great shiraz, and it was a lot of fun. It's cool, 'cause you have this idea, and to watch it become successful, it's so exhilarating. When you wanna be part of… Like with the wines and the alcohol, the label designs and the names and the colors and all that. So it's fun to have a concept and to actually see it happen."

Neil is also the CEO of Rockstar Sports Group, which was officially awarded an expansion team in Las Vegas by the AFL (Arena Football League). The rocker together with his business partners in Rockstar Sports Group, Bob Hewko, a former Florida Gators and Tampa Bay Buccaneers quarterback, aviation businessman Mark Daniels, and technology businessman Sohrob Farudi, will set out to begin building the Las Vegas-based team named the "Las Vegas Outlaws."