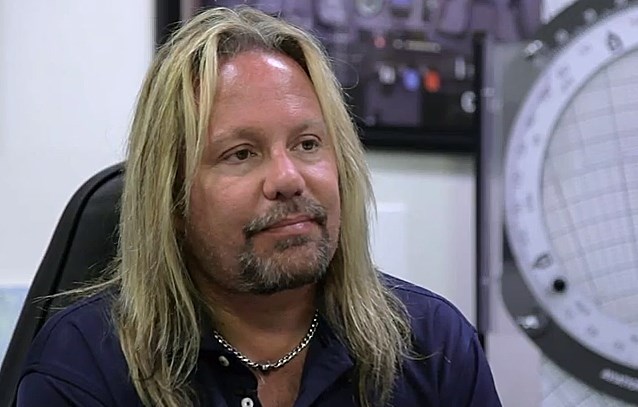 MÖTLEY CRÜE's VINCE NEIL: If I Got 'The Celebrity Apprentice' Offer, I'd Do It

MÖTLEY CRÜE's Vince Neil says that he would gladly appear on the next season of NBC's "The Celebrity Apprentice" if he got the offer to do it.

Norm Clarke of Las Vegas Review-Journal reported last week that Neil "has been telling friends" he will appear on the next season of the Donald Trump-hosted celebrity version of "The Apprentice", which has contestants compete to win money for their favorite charities. Celebrity contestants take part in business-driven tasks around New York City and work grueling hours on mentally challenging tasks that test their ability to work together.

Writing on his Twitter profile, Neil said: "Been off for awhile. New phone password didn't work! The rumor about apprentice was started by a loser wannabe reporter Norm Clark who I haven't seen or talked to in over 2 years! I've talked to the show but that's it! But if I got the offer I'd do it!! Sounds fun!!"

Previous rockers who have appeared on "The Celebrity Apprentice" include TWISTED SISTER frontman Dee Snider and POISON's Bret Michaels.

Ratings for "The Celebrity Apprentice" were down about 20 percent last season, but the show still frequently led the 10 p.m. Sunday timeslot in adults 18-49, according to Zap2It. "That's of value to us in a world where time period wins on NBC aren't always in great supply," NBC's head of alternative programming, Paul Telegdy, told the site.