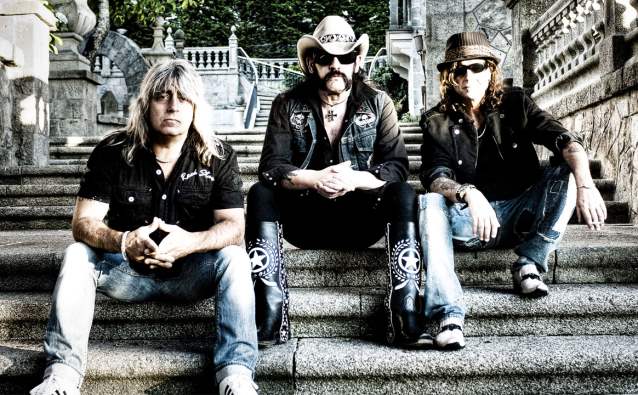 MOTÖRHEAD has selected "Heartbreaker" as the first single from its upcoming 21st studio album, "Aftershock".

"Aftershock" will be released as a an official Classic Rock collectors fanpack that features the new LP in full plus a 132-page magazine that forms the "ultimate sleevenotes" to the new release, with extensive and exclusive interviews with Lemmy, Mikkey Dee and Phil Campbell.

Pre-order your copy now at this location (official on-sale date is October 21).

Inside is everything you need to know about "Aftershock" and the world of MOTÖRHEAD in 2013: inside the making of album, new features covering all eras of the band's career from 1975 to 2013, and tons of previously unseen pictures.

Plus, if your order is placed before 12:00 (GMT) on Monday, September 23, your 100% official collector's fanpack will come with an exclusive personalized poster featuring your name.

Due in North America on October 22, "Aftershock" was recorded at NRG Studios in North Hollywood, California and is described in a press release as "a true leveler, a crushing confirmation of everything MOTÖRHEAD stands for, marching from the dust storm to deliver 14 belting statements which see MOTÖRHEAD in perhaps their best writing form for years. There's swagger, there's punch, there's speed and there’s dirty filthy grooves, Lemmy Kilmister, Phil Campbell and Mikkey Dee showing clearly that MOTÖRHEAD is not simply a band, it's a genre!"

"Steal it if you must, buy it if you can!" says Lemmy, whose pride in the album is so immense that guests to his home and dressing room in the last couple of months have been treated to extremely loud airings of the rough mixes, while Phil Campbell adds, "I really think the variation on the album shows that we've dug deep and produced some of our best work for a long time."

"It is," says Mikkey Dee, "a really, really strong MOTÖRHEAD album, one that really does define everything this band stands for."

MOTÖRHEAD canceled a handful of shows on its European festival tour last month after Lemmy suffered a haematoma (where blood collects outside of a blood vessel). The news of Lemmy's latest medical issue followed reports that he was also recently fitted with a defibrillator because of heart problems.