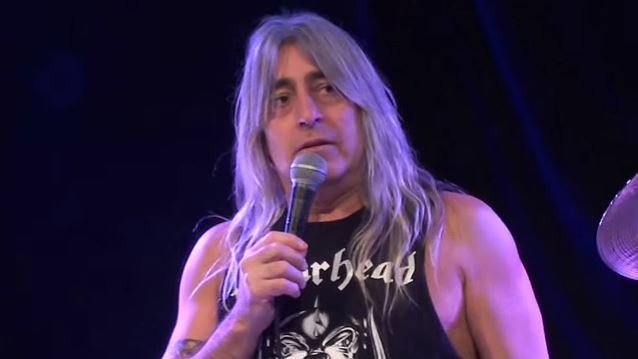 MOTÖRHEAD drummer Mikkey Dee took part in a "drum camp" during this year's Musikmesse trade show, which was held April 7-10 in Frankfurt, Germany. Video footage of the event — which includes a clip of Dee playing first drum solo since MOTÖRHEAD's final show on December 11, 2015 in Berlin, Germany — can be seen below.

Speaking about how he approaches playing a drum solo during a performance, Dee said: "When I think about a drum solo, it's really not a thing I like to do a million technical things. I want it to work in a song and in a set. And I think it did okay in the [context of a] MOTÖRHEAD [concert in] that I was playing that it was more of a power thing and [it had] little bits and pieces for everyone, really. Even critical drummers [would say], 'Yeah, that thing is pretty cool he's doing there, but the rest is pretty simple.' And it really is. It's just a matter of how you arrange it."

MOTÖRHEAD frontman Lemmy, who celebrated his 70th birthday on Christmas Eve (December 24),learned two days later that he was afflicted with an aggressive form of cancer. He died two days later, on December 28, at his home in Los Angeles.

The band was forced to cancel a number of shows last year, although they did manage to complete one final European tour.