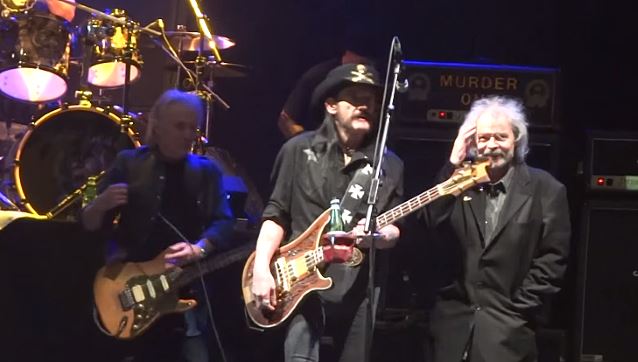 Ex-MOTÖRHEAD members "Fast" Eddie Clarke (guitar) and Phil "Philthy" Taylor (drums) rejoined their former bandmate Ian "Lemmy" Kilmister on stage on November 6 at National Indoor Arena in Birmingham, England before Clarke, Lemmy and current MOTÖRHEAD drummer Mikkey Dee ripped through a blazing rendition of the MOTÖRHEAD classic "Ace Of Spades". Fan-filmed video footage of the performance can be seen below.

Asked in a 2011 interview with Guitar International if he had any plans to ever reunite with Taylor and Clarke, Lemmy said: "No, because these two guys with me now have been with me longer than the original two. They played 'Ace Of Spades' more often than those two. They played 'Overkill' more often than those two. Why should I put Phil [Campbell] and Mikkey on hold to go off with guys who probably can't play them as well? They've been out of practice. It's ridiculous to think of it. Then I would be a nostalgia act. I'm all for the now and the future."

Regarding whether he still talks with Phil and Fast Eddie, Lemmy told Guitar International: "Now and then. I like Phil, he was my best mate. Eddie was kind of a friend except he was always complaining about something. It got kinda tedious. Last time he left, we laid low. Before, one of us would go off and bring him back. It was a shame he shouldn't have done that, we had a lot going for us back then. He should have stuck though it. It was the Wendy O. Williams thing and I couldn't understand that (reference: recording 'Stand By Your Man', a cover version of the Tammy Wynette with Wendy O. Williams). He just gave up on it because Wendy wasn't immediately perfect on it, she just needed to go through it a few times and he left the band over it. I couldn't fucking believe it. I think he was expecting to be talked back in. Phil came in the room and said, 'Eddie's left again.' I said, 'Whose turn is it to go talk to him?' [Laughing]. I said, 'Fuck it, I'm not doing it.' That's the way it went. Wrong decision on his part."

Great to have Philthy Animal Taylor and Fast Eddie Clarke join us in Birmingham What a way to start the tour!!!!!!!!! pic.twitter.com/c5hSRGjZVV