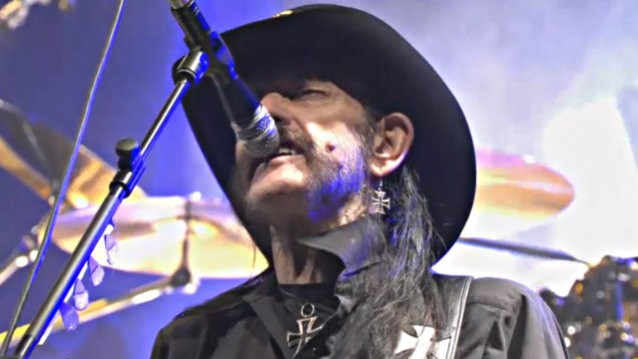 MOTÖRHEAD's LEMMY Is 'Feeling Much Better'

MOTÖRHEAD has released a statement regarding the cancelation of the band's April 25 appearance at the Monsters Of Rock festival in São Paulo, Brazil.

Says the group: "Due to a food-related tummy problem, unfortunately, [MOTÖRHEAD frontman] Lemmy was not able to perform the show in São Paulo. He is already feeling much better and ready to continue the South America dates! Next stop Curitiba!

"Lemmy regrets this mishap very much and is looking forward to making it up to all the fans."

As a last-minute replacement for MOTÖRHEAD at Monsters Of Rock, the other two members of the band — guitarist Phil Campbell and drummer Mikkey Dee — took part in a jam session with Andreas Kisser and Derrick Green of SEPULTURA, along with other guests (see video below).

British metal legends JUDAS PRIEST, who were scheduled to play right after MOTÖRHEAD, added 30 more minutes to their set as a result of MOTÖRHEAD's cancelation.

Lemmy, who turned 69 years old in December, in 2013 suffered a haematoma (where blood collects outside of a blood vessel),causing the cancelation of a number of the band's European festival shows.