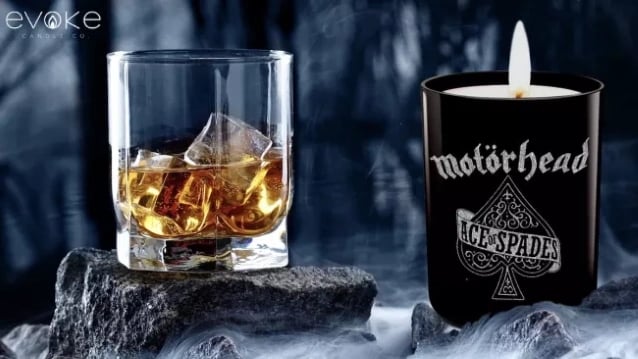 Evoke Candle Co., a luxury brand candle company that creates candle scents inspired by songs and musical memories, has announced its officially licensed MOTÖRHEAD "Ace Of Spades" candle. The candle is inspired by what is one of the most loved songs by any band ever. The track was released in November 1980, with its iconic riff and drum intro still as punchy today as it was four decades ago.

The MOTÖRHEAD "Ace Of Spades" candle features a smoked whiskey fragrance and contains the "Ace Of Spades" artwork and mainman Lemmy's immortal words "Born To Lose, Live To Win."

Evoke Candle Co. founder Gina Giambalvo-Glockler says: "I remember the first time I laid eyes on the 'Ace Of Spades' album — it was 1980 in Dallas, Texas. I went to our local record store and as always straight to the import section because everyone knew that was where the best new music was to be found. I saw the cover and I had to have it. As soon as I got back home straight onto the turntable it went and that was it — I was hooked for life! We are proud to partner with MOTÖRHEAD and Global Merchandising Services on our 'Ace Of Spades' candle."

The "Ace Of Spades" candle is available for pre-order now, with shipping set to begin in late October.