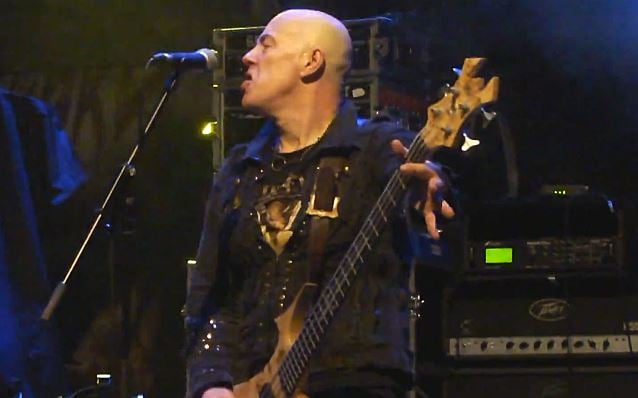 Fan-filmed video footage of MPIRE OF EVIL (formerly PRIMEVIL) — the band formed in 2010 by ex-VENOM members Jeff "Mantas" Dunn (guitar) and Tony "The Demolition Man" Dolan (bass, vocals) — perfoming on January 30 at Atak in Enschede, The Netherlands can be seen below.

MPIRE OF EVIL's "Crucified" album came out in May 2013 via Deadline Music (a subsidiary of Cleopatra Records). The booklet includes art by Mantas, lyrics and band pics.

"Crucified" bulldozes through eleven tracks — including nine re-recorded versions of VENOM tracks from Dolan's time with the group — opening with the driving "Temples of Ice" and not taking its foot off the gas through the closing beast, "Taking It All" (which includes the perfect anti-chant). The riffs are dense and mighty, rhythms propulsive, and the vocals relentlessly intense. The record takes on dystopian themes of destruction, evil, and corruption and, in the case of pointed tracks like "Blackened Are The Priests", all three.

MPIRE OF EVIL released its full-length debut, "Hell To The Holy", on March 26, 2012 via Scarlet Records. The CD was produced by Mantas and features cover artwork by Gyula Havancsák (ANNIHILATOR, DESTRUCTION, GRAVE DIGGER).