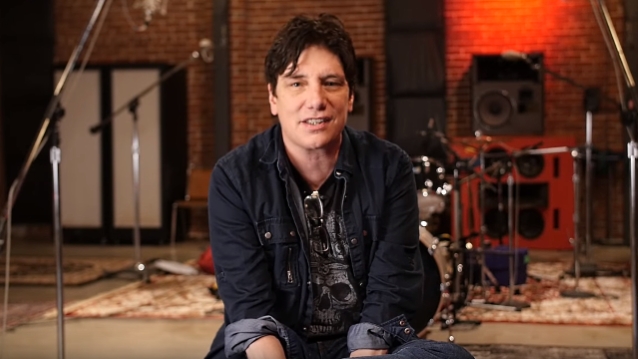 MR. BIG vocalist Eric Martin has confirmed that he is putting together material for his long-awaited new solo album. "I'm working with the two guitar players in [AVANTASIA], Oliver Hartmann and Sascha Paeth," the singer told Australia's "Collision" radio show (hear audio below). "And Sascha is the producer as well of AVANTASIA. And we've kind of been throwing songs into the mix. We only have a few now, but they're helping me out with a solo album. I've been threatening to do one for the last 14 years or longer. But I'm determined to do a record with these guys and have it done by the end of the year."

Martin, who is currently on the road as one of the guest vocalists with AVANTASIA, also spoke about MR. BIG's future plans following last year's passing of Pat Torpey. The drummer died in February 2018 at the age of 64 from complications of Parkinson's disease.

"I know for a fact that me, Billy [Sheehan, bass] and Paul [Gilbert, guitar] are still processing Pat's death," he said. "It took a lot out of us when he died. And Billy is doing his WINERY DOGS, Paul's got his… How many albums has this kid made? I don't know. Many — way, way too many. But anyway… He's got a new album out. And then I'm working with Oliver and Sascha. And then, obviously, [I've got] this AVANTASIA gig."

Martin's last solo release was 2012's "Mr. Rock Vocalist", which put a capstone on the "Mr. Vocalist" series of albums. The effort consisted of covers of songs by Japanese rock bands or solo artists, along with two original tracks.