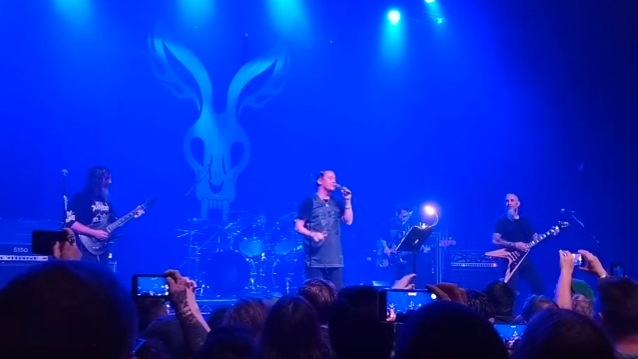 MR. BUNGLE played its first show in close to 20 years last night (Wednesday, February 5) at the Fonda Theater in Los Angeles, California. The concert saw the Eureka-born band performing its 1986 demo in its entirety, and marked the first time these songs have been played live in over 30 years. MR. BUNGLE also played a new track reportedly called "Meth", as well as covers of songs from SLAYER, S.O.D. , SIEGE, SEALS AND CROFT and THE EXPLOITED).

MR. BUNGLE has two more shows scheduled at the Fonda before traveling to San Francisco and New York.

Said Spruance: "Ever since Trevor hatched 'The Raging Wrath Of The Easter Bunny v.2' idea a few years back, Patton, Lombardo, he and I had each been incubating some idea of that egg. Lombardo called me one day and asked me to make some guitar demos so he could learn the songs. He had this generous idea to surprise the other guys with being totally ready to go with the tunes. It just so happened that I was in Eureka at the time. So, I found myself revisiting all of those riffs in the same goddamned town and in the same goddamned house where I recorded all the original guitars on that demo 33 years earlier. There was something about actually physically working out the mania of those riffs again at Dave Lombardo's request, in that environment — it just split my head open. It wasn't long before the train of destiny had picked up too much speed for any of us to jump off."

Support at MR. BUNGLE's February shows is being provided by a mix of artists that both influenced the Eureka-born outfit's 1986 demo, as well as current bands that the musicians are both fans of and feel are carrying on the spirit of that era, both musically and in attitude. Hand-picked by the MR. BUNGLE bandmembers, the openers include CATTLE DECAPITATION, POSSESSED, HIRAX, THE MELVINS, HO99O9, C*NTS and SPOTLIGHTS.

"Putting these shows together it occurred to us that this was a great opportunity to expose unsuspecting audiences to some of the absolutely legendary thrash, death metal and hardcore bands that originally inspired us in the mid-'80s," explained Spruance. "And if we're going to do that, why not reunite with some of the equally legendary bands we were close with in the '90s? And why just concentrate on the past? Of the current bands that have taken some kind of inspiration from the heavier side of MR. BUNGLE in doing their own thing, why not invite the select few that have managed to inspire us back?" 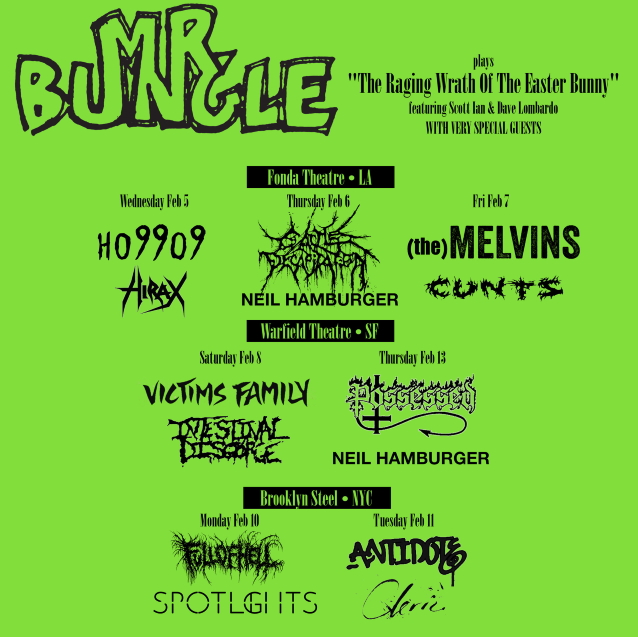