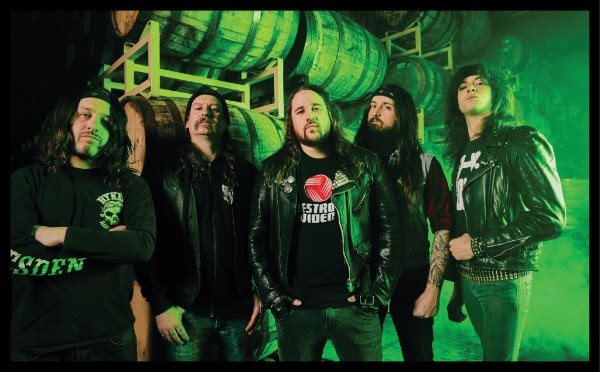 Richmond, Virginia's MUNICIPAL WASTE released its sixth studio album, "Slime And Punishment", a year ago via Nuclear Blast. In support of that release, the band is about to embark on a run of 20 club and festival dates across nine countries in Europe. To mark the occasion, the guys have unleashed a brand new music video for the album's title track.

Commented MUNICIPAL WASTE's Ryan Waste: "Teaming up with Norman Cabrera for this video was a match made in horror. His 35 years experience with practical FX in film shined through, as you'll see in this latest WASTE clip. Not only a fan of monsters, he's a metal lifer like us, so we saw eye to eye on the aesthetic of everything involved.

"Initially, Norman approached me to make a mask for MUNICIPAL WASTE, which has been his specialty for many years. I said, 'Why don't you do us one better and make a damn video?!' He leaped on the opportunity and even stepped up as the director, as well as the effects designer, making multiple masks and creating the horrific world of 'Slime And Punishment'.

"We all grew up on VHS and that played a major inspiring role in the video as well. It was like making a movie, all the work that went into this and there are countless people to thank. I have to give shoutouts to Slasher Dave for composing the intro score and Joel Grind for taking us out with the synth outro, bookending this nightmare perfectly."

"Slime And Punishment" was the first WASTE album to be engineered by bassist Phil "Landphil" Hall at Blaze Of Torment Studios in Richmond, Virginia. Mixing and mastering was completed by Bill Metoyer (SLAYER, W.A.S.P., LIZZY BORDEN and DARK ANGEL) in Hollywood, California.

The cover artwork for the sixth album was created by the band's good friend, Andrei Bouzikov. This was the fourth cover he created for them as he was responsible for the art for "Massive Aggressive", "The Art Of Partying" and the split with TOXIC HOLOCAUST, "Toxic Waste".