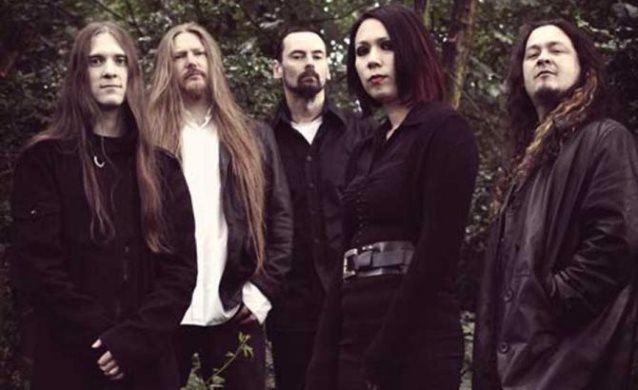 U.K. doom metal veterans MY DYING BRIDE have parted ways with guitarist Hamish Glencross due to "irreconcilable differences" and have been rejoined by Calvin Robertshaw.

MY DYING BRIDE's three remaining festival appearances in 2014 — Denmark's Copenhell on June 13, Slovenia's Metaldays on July 25 and Czech Republic's Brutal Assault on August 9 — will all go ahead as planned and will feature the band's longstanding guitar technician Robb Philpotts filling in on guitar.

Regarding Robertshaw's return to MY DYING BRIDE, the band states: "Calvin is one of the original guitarists that helped make MY DYING BRIDE what it is today. His departure after the now-infamous '34.788% Complete' album left us all stunned but now we have convinced him to rejoin and are sure this is going to be a success.

"We feel that MY DYING BRIDE has now stabilised again and we are really, really excited at the prospect of going forward as a band united again by doom metal music.

"We will be working together with Calvin on finishing the new LP, which we plan to record later this year.

"The writing of the new LP has been progressing somewhat slower than usual due to our internal problems, but despite that we now have around seven new songs in a very complete fashion, obviously we are now all wondering what Calvin can bring and now can't wait to get back into the studio to find out.

"The studio we have chosen to use for the majority of the recording is our old haunt Academy Studios. Then we will be back at Futureworks for some finishing off and possibly vocals. Time will tell.

"We would like to thank from the very bottom of all our hearts, all of our supporters old and new for their patience and love, we promise you a continued and very much stronger MY DYING BRIDE in the future."

MY DYING BRIDE released a new EP, "The Manuscript", in May 2013 via Peaceville Records on CD and vinyl.

"The Manuscript" contained four new and exclusive songs. It was recorded and mixed at Futureworks Studios in Manchester, U.K. with the band's longtime producer, Rob "Mags" Magoolagan.

MY DYING BRIDE's latest full-length album, "A Map Of All Our Failures", was released on October 15, 2012 in Europe and October 16, 2012 in the U.S. via Peaceville Records on CD, double vinyl and special-edition CD+DVD.