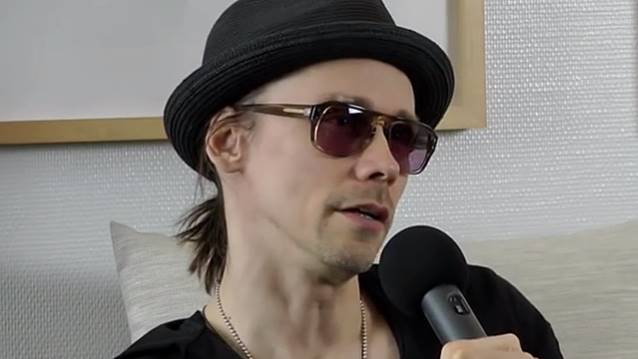 MYLES KENNEDY Loves Being In Both ALTER BRIDGE And SLASH's Band

PepsiMTVIndies recently conducted an interview with ALTER BRIDGE and SLASH FEATURING MYLES KENNEDY & THE CONSPIRATORS singer Myles Kennedy. You can now listen to the chat in several parts below. A couple of excerpts follow (transcribed by BLABBERMOUTH.NET).

On singing for both ALTER BRIDGE and Slash:

Myles: "Look, when it first happened a few years ago, I was in ALTER BRIDGE and then Slash reached out to me, I had no idea that it was gonna turn into this. I thought it was gonna be like we were gonna tour for a summer, and then everything just kind of took off and started going really well. So, five years later, it's been just non-stop — tour, record with one band and then the same thing with the next. And if I didn't love it so much, I think I'd be totally just beat up at this point. But I love it. I get to stand on stage, I get to create, I get to play with Slash, who's crazy good, and my bandmates in ALTER BRIDGE. I'm a lucky guy, so I'm not complaining. It's all good."

On the differences between the songwriting process in ALTER BRIDGE and SLASH FEATURING MYLES KENNEDY & THE CONSPIRATORS:

Myles: "With Slash, the melodies and lyrics in this band are… That's pretty much my deal. Slash will come in with music arrangements, and it's cool — it's like having this really great canvas to get the melody over and then put a story to it with a lyric. With ALTER BRIDGE, Mark [Tremonti, guitar] and I both bring in music and melodies and lyrics, and we kind of… It's more like a puzzle. I was just working on some stuff in my hotel room; he sent me some ideas this morning. So it's like a riff and a chorus or a verse, and then I'll hear it and go, 'Oh, I hear the song continuing this way with this part.' So it's a different process, but because they're so different, it keeps it really exciting for me as a writer. And it's not like the same thing, and it keeps it fresh."

On the name "Myles Kennedy" being a "brand":

Myles: "Yeah, it's funny you should bring that up — the whole brand thing. That's something I started thinking about, about a year ago. I was talking with a friend and she brought that up, about the idea of a brand. 'You have a brand.' And I was, like, 'Wow! That's a new twist on things.' I always just thought of myself as a musican. But I guess that's the world we live in — everybody's kind of got their brand, especially with social media, and you have control over your brand through how you post on Instagram, how you have your voice on Twitter. And it's something that, I admit, I have a lot of work to do — quote-unquote to maintain my brand. 'Cause I'm so focused on the music that I feel like sometimes I let my brand kind of… I don't focus on that. Some people are pros at that. Say what you will about the U.S. Kardashian family, they've done a tremendous amount with their brand, just through social media. I'm not sure what their talent is, but it's all just taking that and utilizing it, and that's something that I'm trying to get better at."

This is your first time in India. What do you think of the people and the place?

Food is a big part of Indian culture. What did you think of it during your time in India?

How do you manage writing, recording and touring with two successful bands?

How different is it working with ALTER BRIDGE and Slash?

Globally, the name "Myles Kennedy" is now a brand. What's your take on that?

Your first performance in Mumbai was probably the best the city has ever seen. How was your experience and what are you taking back from it?

What do you include in your vocal warm-up routine?

What advice would you give to every vocalist?

Does being a guitarist help with being a better vocalist?

Where do you see music going globally?