German power metal band MYSTIC PROPHECY entered Prophecy Studios on December 19, 2008 to begin recording its sixth album, entitled "Fireangel", for a May 22 release via Massacre Records. The follow-up to 2007's "Satanic Curses" will be mixed in Sweden under the direction of Fredrik Nordström (DIMMU BORGIR, ARCH ENEMY, IN FLAMES) and R.D. Liapakis (FIREWIND, CHASTAIN, ELDRITCH) and will be made available as a limited-edition digipack featuring bonus material. According to the band, the new CD "will be a step between 'Regressus' [2003] and 'Savage Souls' [2006]." 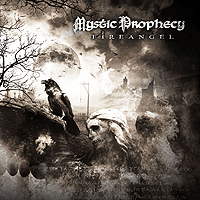