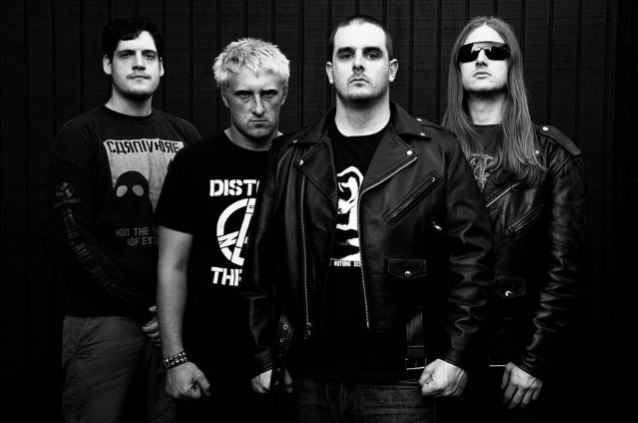 Southern California-based four man hatecrew NAILS will begin recording its third full-length album, titled "You Will Never Be One Of Us", on December 27 with producer Kurt Ballou (CONVERGE, HIGH ON FIRE, VALLENFYRE, MISERY INDEX, TODAY IS THE DAY).

NAILS head misanthrope Todd Jones comments on the group's rabidly anticipated full-length vitriol, that is tentatively scheduled for release sometime in the first quarter of 2016 via Nuclear Blast Entertainment: "In fear of sounding redundant of how 97% of these pre-album release descriptions always come off, I won't try to describe how our new album, 'You Will Never Be One Of Us', sounds. What I will tell you is that the same care and the same attention went into this album as our previous albums 'Unsilent Death' and 'Abandon All Life', and our new album sounds as inspired as either of those two full-length recordings."

He continues: "Our new record has some new twists and turns that are built off the foundation we laid with our previous albums, as well as a lot of familiarity that you've come to expect from NAILS. 'You Will Never Be One Of Us' is for us, for our fans, and for anybody else who feels disgusted and fed-up with social-climbing impostors, trying to leech off of anything they've ever dedicated themselves to. I can say with 110% certainty: We will not let you down."

Formed in December 2007, NAILS is comprised of Todd Jones, Taylor Young, John Gianelli and A.R. Saba. Their music can only be described as being beyond conventional aural brutality. Their unique blend of grindcore, death metal, and punk invokes the most unabashed violent emotions from the recesses of its listeners' reptilian brains. Their raw sincerity, take-no-prisoners live show and D.I.Y. work ethic has earned the band a vast loyal following, and made them the most talked about band in the underground. The legendary Max Cavalera recently accurately declared their current album, "Abandon All Life" as "one of the best albums of the last 20 years," and NAILS to be "probably the heaviest band right now."