In a 14-page mega-interview in the latest issue of Rock Candy magazine HEART guitarist and vocalist Nancy Wilson insists that she takes full responsibility for the band's image during their hugely successful "MTV sex kitten" era. The 1985 "Heart" album proved to be the most successful of the band's 50-year career, hitting number one on the Billboard chart and going five times platinum. Its success was partly down to a radical image overhaul that saw sisters Ann and Nancy Wilson going for a new "sexy and fabulous" look.

"We knew we had to do something radical to be noticed," Nancy tells Rock Candy editor Howard Johnson. "Especially because MTV was so image driven at that point. We were kinda desperate, so we said, 'Sure, we'll put on the jewelry, the costumes, and the high heels. Sure we'll simper at the camera.' So we put on the lace gloves and away we went!

"There were a lot of people saying, 'You look sexy and fabulous,'" Nancy says. "And this is gonna work. And it actually did work! We were in the game not to be failures."

With the benefit of hindsight, Nancy recognizes that there was a personal price to pay for such huge success. "It paid massive dividends, but in a way it was a question of 'gain the world, but lose your soul.' We'd started out really passionate and idealistic, but suddenly there was this whole different tone to the '80s. People really cared about what you looked like."

With her first-ever solo album ready for release, Nancy is hopeful that there will also be HEART live shows in 2021. "There's an offer on the table for the band to play and we're working on it," she says. "I'd love to get up on stage with Ann again."

Rock Candy is a 100-page, full-color bi-monthly rock magazine, created in the U.K.. It covers the sights, sounds and smells from the greatest era in hard rock music, the '70s and '80s. Put together by respected U.K. rock journalists Derek Oliver, Howard Johnson and Malcolm Dome — all frontline writers for the legendary Kerrang! magazine in the golden era — Rock Candy is available in print format with a free digital download version for anyone who buys the mag online at www.rockcandymag.com.

A guitar virtuoso from the age of 10, Nancy is revered as an ingenious guitar player, a gifted lead vocalist, and as an award-winning songwriter. Nancy has co-written a collection of indelible songs that have earned their way into the classic rock canon ("Magic Man", "Crazy On You", "Barracuda", "Straight On"). She has also earned several nominations for her film scoring work. 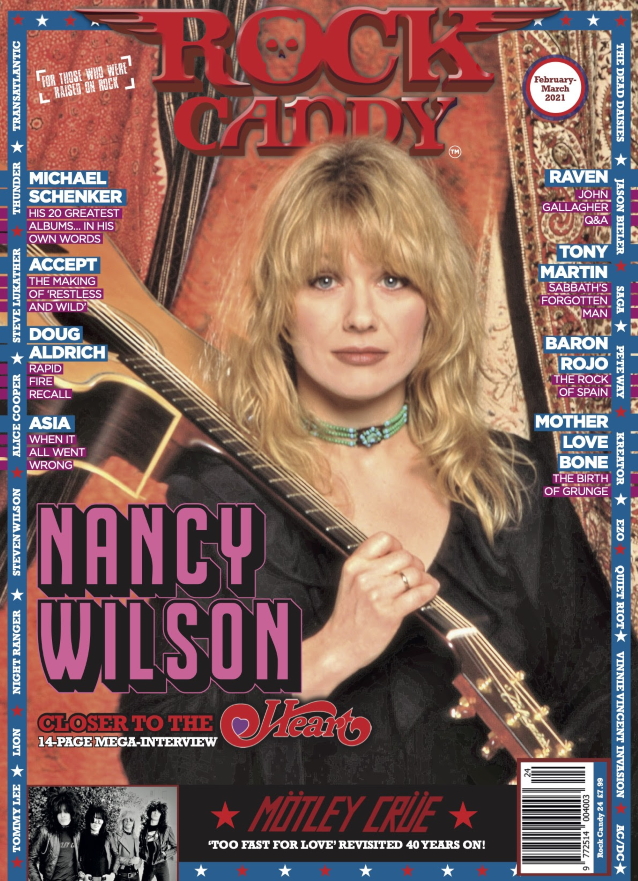