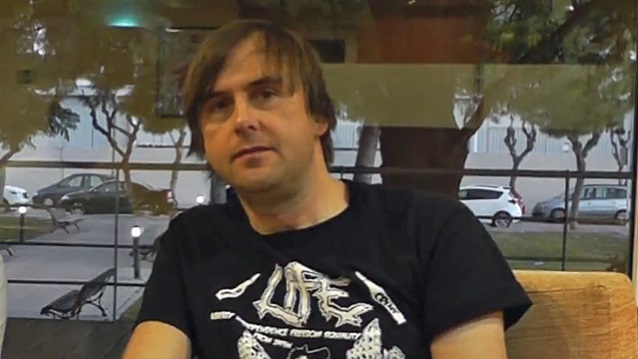 NAPALM DEATH's BARNEY GREENWAY On Next Album: 'It'll Be Finished When It's Finished'

On December 13, NAPALM DEATH frontman Mark "Barney" Greenway spoke to Metal Underground about the progress of the band's recording sessions for the follow-up to 2015's "Apex Predator - Easy Meat" album. He said (see video below): "It's early days. We do our stuff in little pieces now, because we like the variance that that gives you. When you go back to recording [for the next session], it probably will sound different [from the previous one], because a) you might be in a different mood, b) the ambience, temperature, all sorts of things can affect a recording. So we do it in pieces. We've only done one piece so far. [It's] very, very early days. And here's the thing: it'll be finished when it's finished; we're not gonna rush it."

He continued: "[Our record company] Century Media are fantastic — they really have been great to us — but like any other label, there comes a point where they start to get up your ass little bit about it. And you just have to tell them, 'Look, it'll be done when it's done. Trust us.' It isn't like we don't know what we're doing — in our opinions."

NAPALM DEATH will release a special 2CD, 2LP and digital-download compilation titled "Coded Smears And More Uncommon Slurs" in March 2018 via Century Media Records. This special collection will include a total of 31 songs with a playing time of over 90 minutes, compiling rarities and exclusive earworms spanning 2004-2016 from the whirling gene pool of noise that is NAPALM DEATH.

Greenway recently told Metal Wani that guitarist Mitch Harris, who has been taking a leave of absence from NAPALM DEATH since late 2014 to focus on his family life, will "most likely" play on the group's next album.

Harris took an indefinite break in the fall of 2014 to tend to a family situation. He has since been temporarily replaced by John Cooke (CORRUPT MORAL ALTAR).