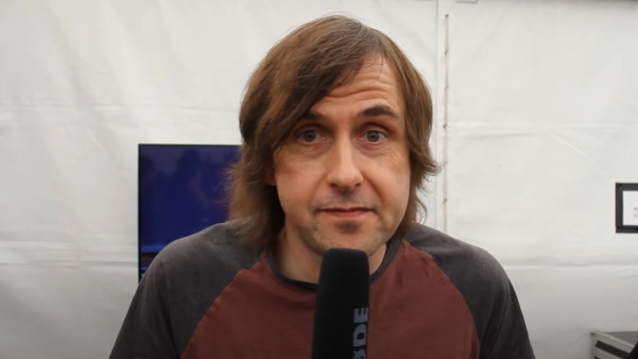 NAPALM DEATH's BARNEY GREENWAY: 'We Are A 'Human Ideas' Band'

In a new interview with RAMzine conducted at last weekend's Download festival in the United Kingdom, Mark "Barney" Greenway spoke about the fact that NAPALM DEATH is often classified as a political band, a perception he says is not entirely accurate.

"Well, the thing is is this: I would say we're equally apolitical because the ideas that we actually espouse are human ideas, and human ideas surely, and should, transcend politics," the singer explained.

Asked if he ever encounters fans who begrudge him for his opinions and how he feels and what he represents, Greenway said: "From time to time, you get people that are in opposition to what you say, but you know what? That's fine, man. I'm not here to beat people with a stick; that's not the point. 'Cause that's kind of entrapment in a way. And I'm not there. But I am here to say there is a better way; there are better ways. It doesn't mean I'm here to say, 'You must do what I say and do what I do.' The whole essence of where NAPALM takes ideas was about actually true freedom, anarchy in a way — peaceful anarchy. So that's where I continue to… that's where my path goes."

More than a decade ago, Greenway told Washington Post Express that he wasn't a fan of "mainstream" politics. "The power structures really bug me," he said. "I won't go into this too deeply because we'll be at this forever, but I think the structures that are in place at the moment give the people in power more rights than you and me have, and how can that be right? Systems evolve and systems change, and maybe there's an argument that the whole worldwide system really needs to change so the people at the bottom of the scale right now really get more input, because it's just not happening and it needs to at some point if we want to maintain a peaceful, tolerant world — it's just got to. So, in that sense, NAPALM's not really — I'm probably playing cat among the pigeons right here — but is it really a political band at the end of the day? I don't know. I see it as an extension of the things I believe in, and the band does: humanitarianism and peace and tolerance. Is that politics? Maybe it is and maybe it isn't; I don't know. But would I still be involved [in social issues] if the band were to go on pause? Well, yeah, because I was of that nature before I joined the band. It wasn't like I flipped a coin overnight and decided this was how I was gonna direct myself; I was that way, to be honest, since I was 6 or 7 years old. My dad was involved with trade unions, and I understand what I believe to be injustice. So, I will always be involved with something, because I can't really see me working for someone in a suit, making money for them, and getting really bored. [Laughs]"

This past February, NAPALM DEATH released a new mini-album, "Resentment Is Always Seismic - A Final Throw Of Throes", via Century Media Records.

"Resentment Is Always Seismic – A Final Throw Of Throes" is a partner recording to NAPALM DEATH's latest album, "Throes Of Joy In The Jaws Of Defeatism", concluding matters through vital, tumultuous grindcore and shockwave ambience.

The eight-song "Resentment Is Always Seismic – A Final Throw Of Throes" comes with a total playing time of 29 minutes and is available as a limited CD digipak, vinyl as well as in the digital album format.