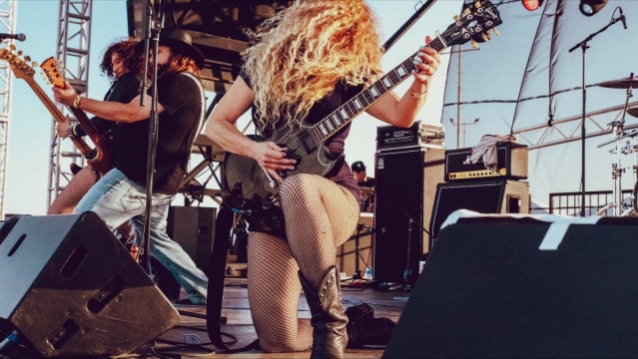 When director James Gunn was looking for a truly rocking and raunchy song to include as part of the upcoming "Peacemaker" show on HBO MAX (starring WWE wrestler John Cena in the role of Christopher Smith/Peacemaker),he couldn't have made a better selection than the NASHVILLE PUSSY classic "Come On Come On".

It appears that Gunn is a fan of the PUSSY. In a Twitter exchange between mutual friend actor Earl W. Brown ("Deadwood", "Something About Mary"),Gunn admitted to personally choosing the Grammy-nominated NASHVILLE PUSSY and song "Come On Come On" for the "Peacemaker" series, and texted: "It has great placement in the first episode."

The first episode, titled "A Whole New Whirled", premieres on Thursday, January 13, 2022, and the song (which was originally included on the band's 2005 album "Get Some!"),will also be included as part of the show's official Spotify playlist this week.

The release of the official for "Peacemaker" perfectly coincides with the arrival of NASHVILLE PUSSY's latest album "Eaten Alive" (of which the CD was issued on December 24, and the double gatefold vinyl on January 14). Recorded in the U.K., this is NASHVILLE PUSSY's "Live At Leeds" and one of most unrelenting concert albums since MOTÖRHEAD's "No Sleep 'Til Hammersmith".

NASHVILLE PUSSY states about being included in "Peacemaker": "It's great seeing someone who shares our sense of humor, and it is especially an honor to have our lyrics used as actual dialogue by John Cena."