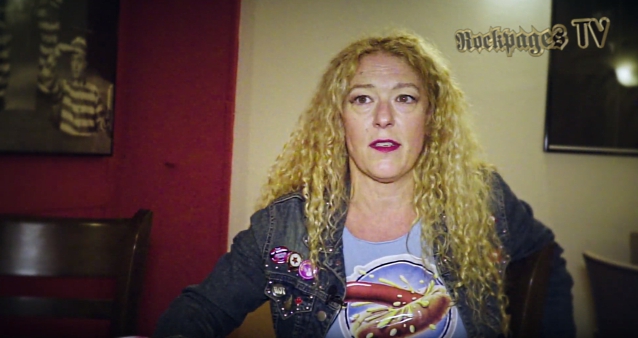 NASHVILLE PUSSY guitarist Ruyter Suys recently spoke with Greece's Rockpages TV. The full conversation can be seen below. A few excerpts follow (as transcribed by BLABBERMOUTH.NET).

Ruyter: "I was a sculptor and tractor driver in Saskatoon, Sasketchewan, and Blaine [Cartwright, NASHVILLE PUSSY frontman and Suys's husband] was on tour with another band called NINE POUND HAMMER. Out of the entire province that day, there was two MOTÖRHEAD shirts — I was wearing one, and he was wearing the other. Him and I started talking, and we were just, like, kind of verbally sparring. I'd make a joke, and then he'd make a better joke, and then I'd make a better joke. We were trying to see how far we could go, and it was like, 'Shit, man. This guy — we're right on each other's level.' We basically fell in love. We dropped acid — it was kind of a dare. We dared each other to get married, and we did it. We wound up moving to the States together. Eventually, after about three or four years, we started NASHVILLE PUSSY... We didn't live anywhere [in] one place. We all gathered in Kentucky to practice, and we'd just play for three days and separate again. The very first tour we ever did, we did on a 45 [rpm single]. We'd released one 45 and we toured for, God, I think eight weeks... It was glorious. It was an insane tour, and we did great. We advertised ourselves as 'Like MOTÖRHEAD, with tits,' because nobody knew what the fuck we sounded like."

Ruyter: "When I was really, really little, the thing that made me want to be a rock star was David Bowie — it was Ziggy Stardust. My parents have amazing taste in music, so they turned me on to all sorts of cool shit. I actually dressed up as Ziggy Stardust for first grade Halloween. I came to school with a lightning bolt on my face and an orange jumpsuit. All of the other kids were dressed up as witches, gypsies and really boring shit — princesses and stuff. He was my first hero, for sure. Jimmy Page was massive in my life, and Wendy O. Williams was another big one. I remember babysitting and her coming on Canadian television and taking a fucking chainsaw and sawing [a guitar] in half. I was probably 12, and I was like, 'Fuck yes! This is so great!' I was listening to HEART and LED ZEPPELIN. As far as women, Nancy Wilson is a fantastic guitar player, but Wendy O. Williams climbing on top of a car and fucking chainsawing a guitar in half... it was like, this is a good balance. If I could be somewhere between the two, it's perfect for me."

On whether she had the chance to meet any of her "heroes," and whether it was a letdown:

Ruyter: "Yes and no. I'll say that meeting Lemmy has been one of the most outstanding experiences of our lifetime — meeting and becoming friends, and being close enough that you can argue about music and get into actual yelling matches and stuff like that over, you know, ABBA or something like that. The day that I introduced my mother to Lemmy, that was a very justifying moment... We introduced the two, and they went off together and they went chatting. My mom came back and she's like, 'That Lemmy, he's very charming, and he's so learned. He really knows a lot about history.' I'm like, 'Yeah, mom. I've been trying to tell you this for fucking twenty goddamn years. I had to start a band, tour the world and then bring him to you before you would start believing me that MOTÖRHEAD rocks? I've been telling you this since high school.' He is definitely an exception to the rule. I did meet Ted Nugent, not in person, but he interviewed me one time, and he's pretty obnoxious. I kind of expected him to be obnoxious, and... whatever. I won't say I'm disappointed. Gene Simmons is another one. We've met Gene a number of times, and he's always been very respectful. I'll give him that. At one point in time when I quit smoking, I actually thought about three people — I thought my mom would be proud of me, and Gene Simmons would be proud of me, because he would yell at me for smoking. He's no longer a rock star [to me]. He's lost that status. He's, just, kind of a guy I know, which is a little strange. I definitely never want to meet Angus [Young], because I will be fucking disappointed, I know that. There's a list of people I don't want to ever meet, unless they just propose to me — unless they say, 'Hey, I'm Angus Young from 1979. Will you be my future wife?'"

Ruyter: "Somebody said it was our 'Powerage', which is pretty fucking cool. I'll take that. It's a challenge for yourself. It's not a challenge to beat the last album. I wouldn't say it's hard to do, because you're always trying to that anyways. You're always trying to best yourself, and do something that keeps you creatively excited. It kind of comes natural. I'm just grateful this album sounds as amazing as it does. We never know what the fuck it's going to sound like, ever. We just hope it sounds like a NASHVILLE PUSSY album. With a new drummer [Ben Thomas], the world is our oyster. He is so diverse, and he's got really good taste, so all of a sudden, it's, like, opening a bunch of rock n' roll doors that were previously shut to us. Ben has really brought something new to the band, which is fucking amazing. Plus, he's great to watch... the guy's a machine."

On the "ingredients" of rock 'n' roll:

Ruyter: "Passion. Passion and balls — and by balls, I mean both estrogen and testosterone — and danger and electricity."