NASHVILLE PUSSY: 'Live! In Hollywood' DVD Due In September

MVD Visual has set a September 30 release date for NASHVILLE PUSSY's new live DVD, "Live! In Hollywood". According to a press release, the disc features "NASHVILLE PUSSY rifling through 19 blistering songs at the Key Club in Hollywood. Blaine Cartwright, Ruyter Suys, Jeremy Thompson, and newcomer Karen Cuda give the crowd exactly what they want and more. All your favorite tracks are here, plus a bonus feature entitled 'Pussy Home Movies' has been added. So sit back, grab your bottle of whatever, and let the pussy do the work!"

NASHVILLE PUSSY's latest album, "Get Some", was released in September 2005 via SPV Records. The CD was produced by Daniel Rey (RAMONES) and mixed by Glen Robinson (VOIVOD, ANNIHILATOR). It features a cover version of IKE & TINA TURNER's "Nutbush City Limits". 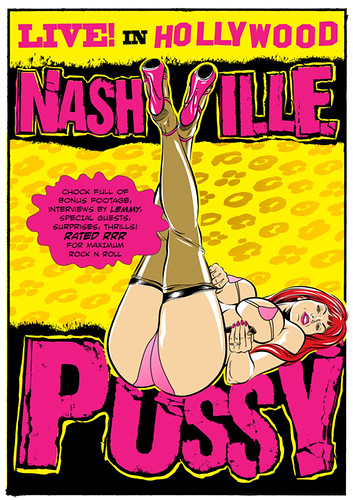