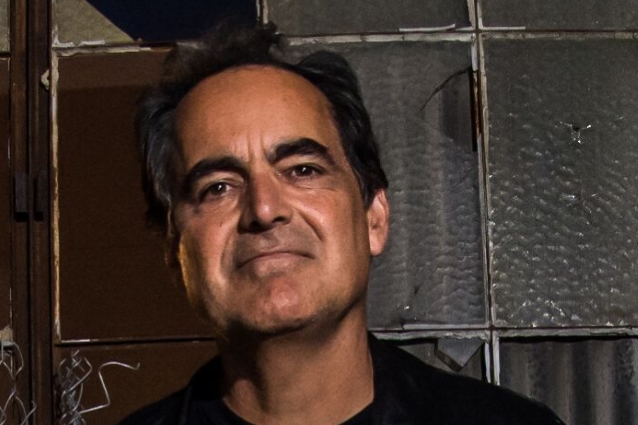 Neal Morse (TRANSATLANTIC, FLYING COLORS, ex-SPOCK'S BEARD) recently spoke with Jonathon Rose of Metal Wani about "The Great Adventure", the new album by THE NEAL MORSE BAND. The full conversation can be streamed below. A few excerpts follow (as transcribed by BLABBERMOUTH.NET).

On how the group came to record a sequel to its 2016 concept album "The Similitude Of A Dream":

Neal: "Sometimes things just want to happen, and you can't seem to get away from it. It was interesting, if you think of it as like a mosaic, maybe. Early on, I had written a couple pieces — I think 'Vanity Fair' was one — and a couple other things that we wound up not using that were obviously pointing toward 'Similitude II', a follow-up. But it didn't seem like the band wanted to go there, and it didn't seem like I had enough ideas. I worked on it a little bit on my own... but I couldn't figure out what the story would be. I didn't really want to just continue where we were. The band wasn't into it — they didn't really want to do a follow-up anyway — and so I kind of gave it up.

"Then we did these sessions last January, and normally, we finish the writing in about six or seven days, and then Mike [Portnoy] does his drums. We spent almost the whole time writing and working on what was a single-disc version of what would become this album. We completed a whole not-concept version of this album, with some different songs and different choruses, but a lot of the same stuff, a lot of the same music... I think Mike tweeted about it when he left the session saying that we had made an album kind of like a [TRANSATLANTIC] 'Bridge Across Forever' album. I kind of sat with that for a while, and then I think it was at the end of January/February, I just began to feel like what it really wanted to be was this follow-up to 'Similitude', which would be called 'The Great Adventure'. I remember Mike had said if we ever do one, it needs to be called 'The Great Adventure', because we say 'Let the great adventure now begin' at the end of the first album. I thought that was a great idea, but I don't know — I didn't have it. I couldn't push it through because I wasn't receiving the whole thing. It was difficult — it was really difficult.

"Around March, I said, 'Hey guys, we need to have a Skype call.' Mike was wanting to just come and finish his drums on the single-disc version, and that would be our new record. I had to kind of drop the bomb that I wasn't really feeling like it was good enough, like it wasn't really what it was supposed to be. I didn't really push this 'Similitude II' thing, because I knew it was going to meet with a lot of resistance. What I did was, on my breaks from 'The Life And Times' touring I was doing, I was coming home and listening to what we'd done in January, and I was taking it and cutting and pasting and slicing and dicing and writing new bits and using some bits that I had written before, and just making this new picture. I wrote a two-and-a-half-hour version of 'The Great Adventure' using a lot of stuff that we'd written together... I presented that to the guys in the spring, and praise the Lord, they all liked it. Mike loved it, and he was not opposed, which I thought was a real miracle because he had been pretty adamant about wanting to do the single-disc version. It was so great — once I sent everybody this new version and they had a chance to digest it, he just said, 'You know, another two-disc concept album, it's a bold move. Let's do it.' He completely turned around. Then, of course, we had to cut it down. It was too long, and everybody didn't like all of everything that I had done, which was fine. Then we had to figure out when we could get back together to do the final version, and that was just this last August."

On deciding how to present the album to the public:

Neal: "I told the guys in July, 'The thing to do would be, if we were really bold, we would say we're going to release this in January and debut it on Cruise To The Edge, even though it's not finished yet. So that's what we did. We put it out there that we were going to do it, but we didn't really know if we were going to make it."

On his approach to songwriting:

Neal: "When I'm writing, I try to just write and not think about anything I've done before... To be honest, I don't listen to my own music that much after I've done it. I listen to it a lot when I'm working on it, and of course, when it's being mixed, I have to listen to it a lot, but I try to just forget about the past and get into as pure of a creating space as I can, and just do what I think sounds cool, what I'm hearing, try to really realize what I'm hearing in my mind, try to connect the dots. With a concept album, it's not just about having a bunch of good parts. We had a bunch of good parts in January, but somehow, it just wasn't all that it needed to be... The thing about concept albums is that for me — and I don't think anybody else cares about this — I have to kind of know the story, and the story brings about the music. It was the same way with [SPOCK'S BEARD's] 'Snow'. I remember saying to SPOCK'S, 'I feel like this wants to be a concept album, so we need to sort out the story, and then the story will give us the rest of the music.'"

On the status of the new FLYING COLORS album:

Neal: "It's great. Mike did his drums; Dave [LaRue] is doing bass; and I'm going to start on keys [soon]. Don't hold me to it, but [we're] hoping for a late summer release."

On whether to expect any TRANSATLANTIC activity in the near future:

Neal: "I would love to do something with those guys, but we don't have any plans at the moment."

"The Great Adventure" will be released on January 25 via Radiant Records.

THE NEAL MORSE BAND will kick off a five-week North American tour eight days later in Morse's Nashville hometown, followed soon after by a performance on the YES-headlined Cruise To The Edge. The group will then The group will then begin a European tour in London on March 24.