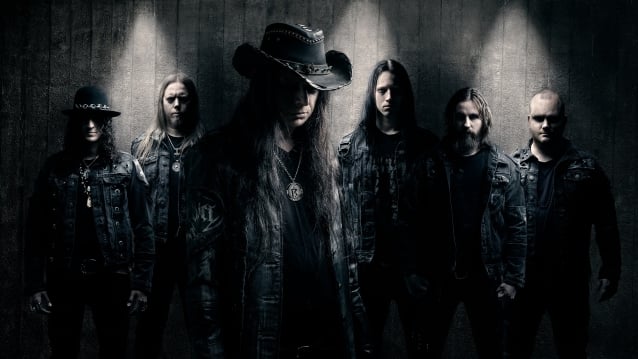 NETHERBIRD Feat. Ex-AMON AMARTH Drummer FREDRIK ANDERSSON: 'Into The Vast Uncharted' Album Due In The Fall

Swedish melodic black/death metal act NETHERBIRD has signed a worldwide deal with Eisenwald. The band's new album, "Into The Vast Uncharted", will be released this fall.

The Stockholm-based band, which features ex-AMON AMARTH drummer Fredrik Andersson, is currently in the mixing phase for its upcoming disc. More information will be announced in the coming months.

NETHERBIRD has blurred the boundaries between black, death and other extreme strains of heavy metal since 2004. The band was founded by like-minded individuals among the Swedish metal scene with the intentions of creating harsh metal while drawing inspiration from black and death metal without any regards, or limitations, to the structures surrounding each respective sub-genre.

Over the years, NETHERBIRD has released four full-length albums and made a number of tours across Europe, including several festival appearances. Their latest album is 2016's critically acclaimed "The Grander Voyage", which catapulted the band into the higher echelon of extreme underground metal. Now it is time for the next step with the release of "Into The Vast Uncharted" via Eisenwald.

"We are very pleased to announce that we have signed to Eisenwald and that our next album, 'Into The Vast Uncharted', will be the first release we do with them," says the band’s founder and vocalist Nephente. "We see this collaboration as a natural step for us, and we feel that Eisenwald share our vision and musical direction. Onwards!"